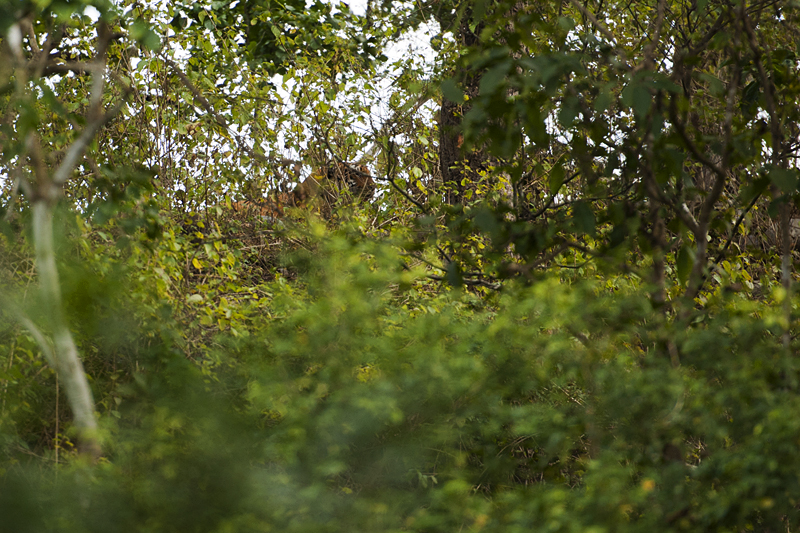 We started the evening Jeep safari from Dhikala forest lodge situated deep inside the core zone of Corbett National Park. Being one of the first vehicles heading out of the lodge, we decided to first recce the Sambar road that runs along the banks of the Ramganga river. Chitals (Spotted Deer) and Sambar Deer frequently cross this road to reach the water’s edge. In fact Tigers have been sighted many times on this road due to the high prey density. We had done less than a km on the Sambar road when we saw a Jeep parked along the side of the road and the tourists were looking at nearby hillock. The Langur alarms calls filled the forest canopy and it wasn’t long before we spotted a beautifully camouflaged Tiger(above) sitting at the top of the hillock. After a couple of minutes, it disappeared from our view, with what looked like a Langur kill. Thankful that we spotted the Tiger, yet disappointed that we did not get a clear view to adequately photograph it, we moved on. Further ahead, we spotted a Grey-headed Fish Eagle (below) perched motionlessly scanning the Ramganga river below for a potential prey. 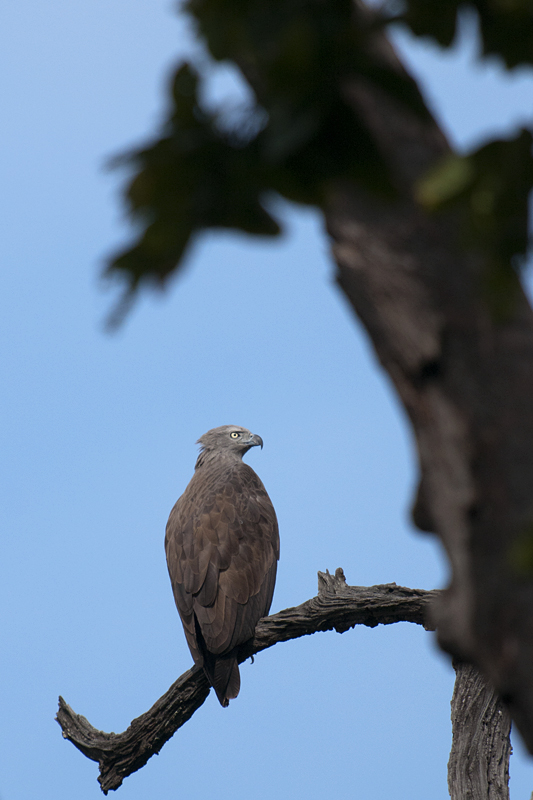 A little ahead on the Sambar road we spotted a Langur troop foraging on the forest floor. One particular individual seemed completely lost in everything that was happening around it. We captured its intriguing expression as the feature image (first picture) of this post.  Happy with what we had seen on the bank of Ramganga, we decided to cross over to the other bank in search of better game. As we approached the wooden ramp that was used as a makeshift bridge to cross the river stream, we noticed a Plumbeous Water Redstart (below) perched on the it. It was interesting to see how this tiny bird was taking frequent dips in the freezing water in an attempt to catch insects on the water surface and then returning to the bridge and using it as a lookout perch. 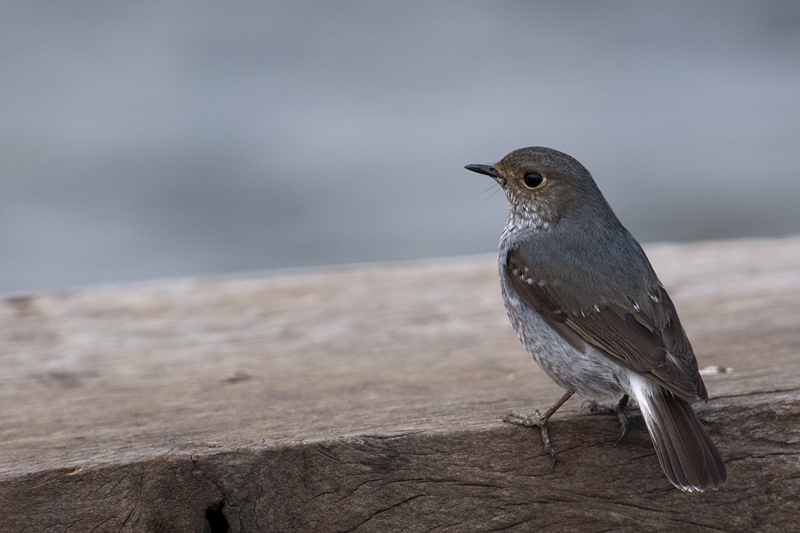 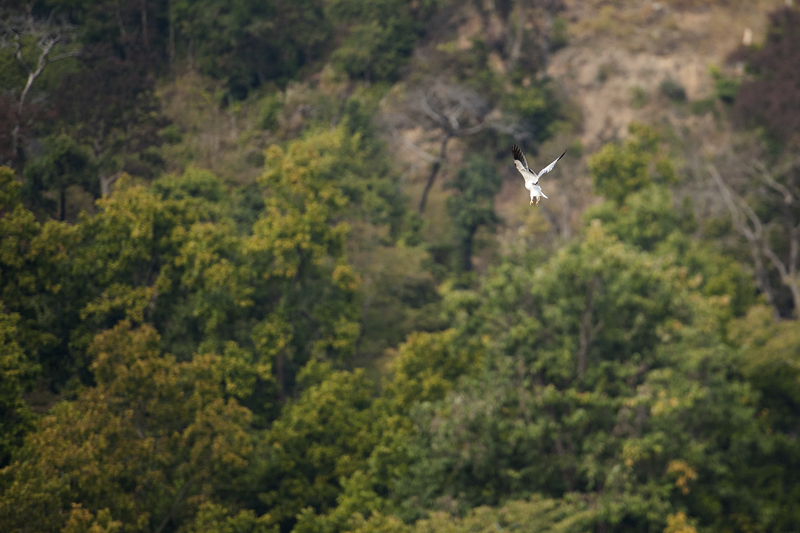 After a few minutes, it flew away in search of a better feeding spot and we slowly crossed the river on the wooden ramp (makeshit bridge), which creaked under the weight of our Jeep. We were still driving on the dry river bed when we saw a Black-shouldered kite (above) hovering in mid air as it tried to spot its prey. On reaching the other bank we drove on the safari road along the bank captivated by the magnificent landscape and reached a location that was directly opposite the Dhikala forest lodge (top left hand corner of the image below). That’s when we spotted a herd of Elephants (below) in the distance walking towards the river, possibly to quench their thirst. 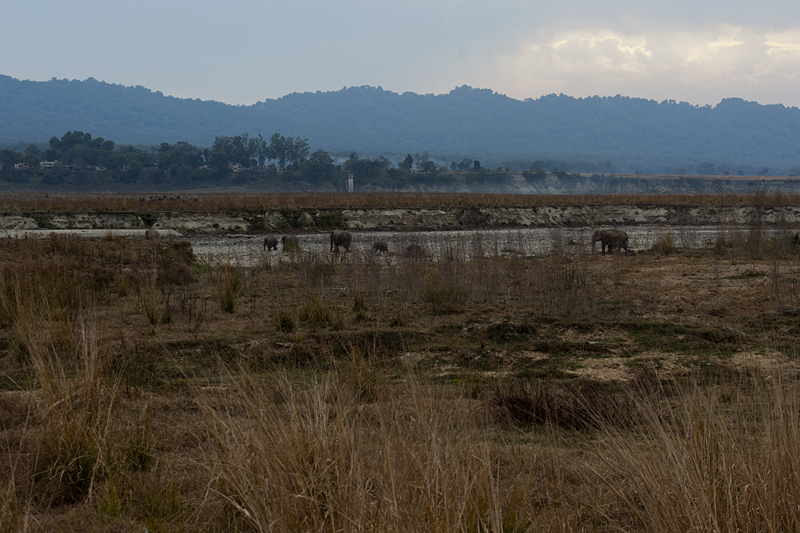 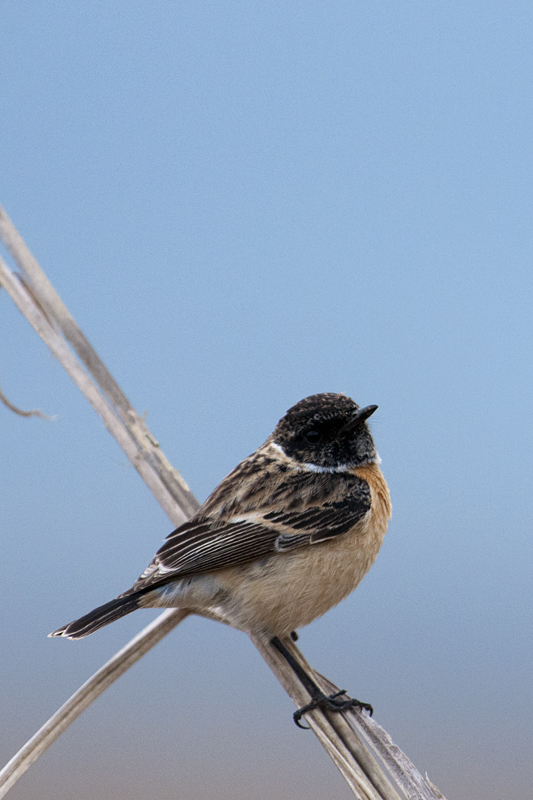 We then turned around and decided to head deeper into the forest when we spotted a Common Stonechat (above) precariously perched on a tall grass stalk that was swaying to the wind’s rhythm. As we were photographing the Stonechat, we heard Chital (Spotted Deer) alarm calls in the distance and we hurried in that direction.  When we reached the general location of the alarm calls, we noticed that the Chitals had calmed down probably because the predator had moved on. We drove a little ahead, when we again heard the Chital alarms calls coming from the same area that we had just left behind forcing us to turn around. As we reached the location, the alarm calls once again died down and there was no predator in sight. After playing this hide and seek game for a couple of times, we decided to head back since we were a long way away from the Dhikala forest lodge. As we reached the river bank, we saw a Sambar Deer (below) slowly crossing the river. When it reached the middle of the stream, something caught its attention and it paused for a few seconds before resuming its casual stroll to the other bank. Our tracks crossed once again and we caught the Sambar Deer right next to the Jeep track before it disappeared into the tall grass. 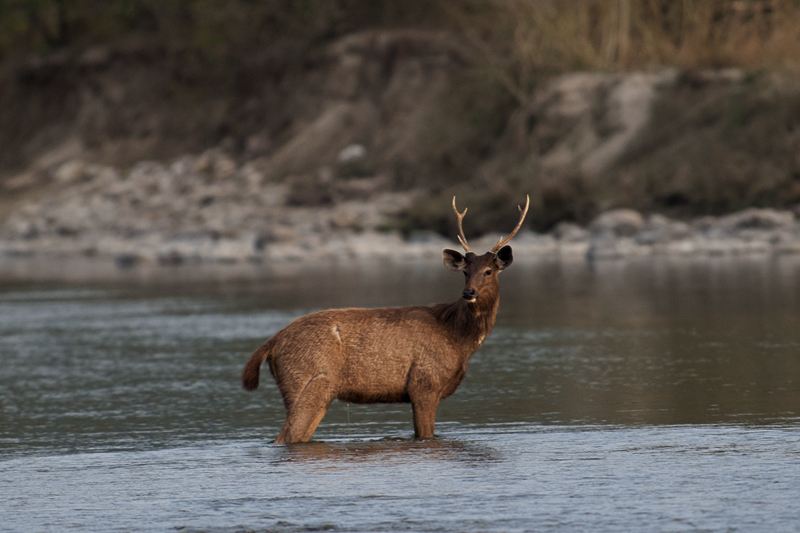 Satisfied with the various sightings on this safari, we headed back to the lodge with lingering thoughts of spotting a Tiger in more photography friendly settings.