Langur walking in the Kabini wilderness 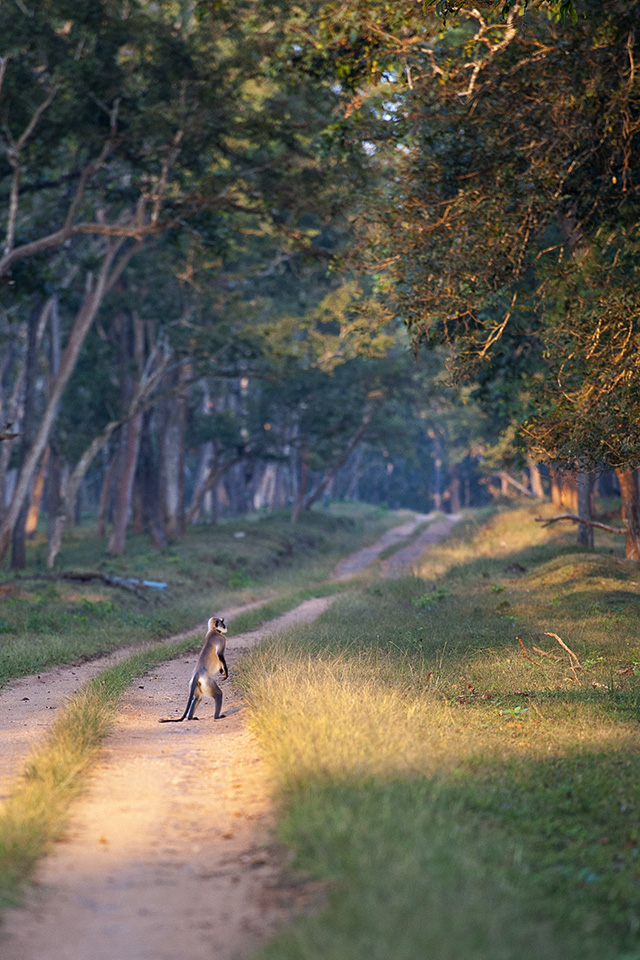 On this afternoon safari in Kabini, we drove for a long while enjoying the sounds and smell of the wilderness. We didn’t see much until we spotted this huge Asiatic Elephant grazing along the safari tracks. We switched off the vehicle to get some pictures of him, when we heard the alarm calls of a Barking Deer, not far away. Our experience tells us that a Muntjac, (commonly known as Barking Deer) alarm call is 100% proof that there’s some predator close by. We rushed ahead to spot the Muntjac, but we could not see the Deer, though we could hear it clearly. The Barking Deer was well hidden in the lantana and all of a sudden, we heard a skirmish and that’s it. There was total silence. We waited for a few minutes, but the call had come to an instant halt – it was clear now that the Barking Deer had been hunted down by a predator – most probably a Leopard. But nothing came out of the Lantana so we were left to our speculations. We then went back to the Elephant, which was engrossed in grazing the green grass all around.

We were amazed at the size of his tusks and took some pictures of him showing them off, as he got closer to us.

After taking a few pictures we moved on and then we spotted this Common Langur sitting on a fallen dead tree trunk. It made a lovely composition, so we took a few pictures and waited. The Langur got off the trunk, came onto the safari road and nonchalantly walked along. It brought a smile as it reminded us of our blog title, Walk the Wilderness.