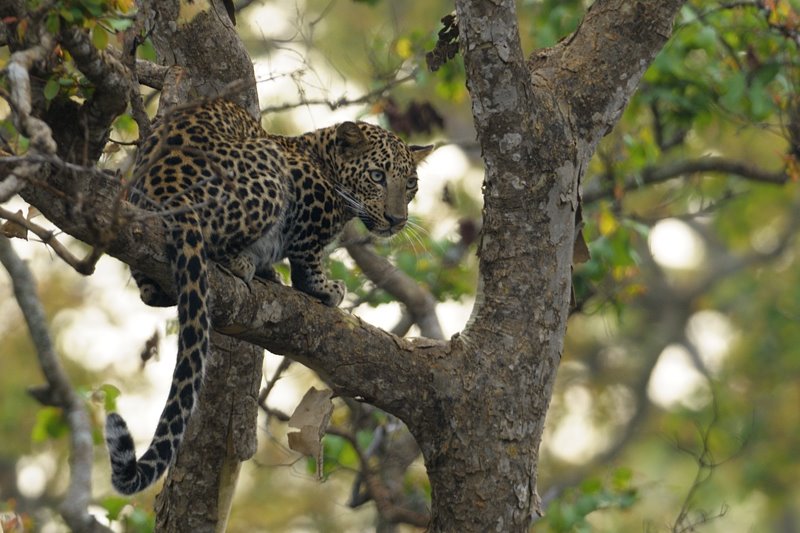 Since the time we started this blog, we have been lucky with Leopard sightings. We have also been very fortunate to have photographed this elusive, beautiful cat many times during our various safaris into the Indian wilderness. The dream sighting of a Leopard, is by far our best sighting of a Leopard in India.

During our last visit to the Bandipur National Park, during one of the evening safaris, we were lucky to have spotted a Bengal Tiger, for a brief yet exciting nine seconds. Next day morning we headed towards the same location to see if lady luck was still smiling on us or not. As our jeep took a turn on the game track, we sighted a couple of Dholes (Indian Wild Dogs) darting across the jeep track. They seemed to be in a hurry to get somewhere and we steered the jeep to follow them. As we maneuvered the Jeep to a vantage point so that we could keep the Dholes in our sighting, we heard the Langurs creating a cacophony with their alarm calls. The Dholes disappeared into the lantana by the side of the tracks and all we could hear was their chaotic jostling, normally heard when they have made a fresh kill and are feeding on the same. We asked the jeep driver to park by the side of the road and we waited. The next 45 minutes would surely rate as one of our best wildlife moments till date.

While our eyes were looking out for the pack of Dholes, our excitement knew no bounds when we spotted a Leopard running amongst the lantana. And guess what – it was being chased by the the very pack of wild dogs! The Leopard ran towards us and climbed a tree, about 100 feet from where the jeep was parked. The Dholes were not far behind and one of them took a leap at it from the base of the tree and almost caught the scrambling Leopard. The stunned Leopard kept going up the tree and that’s when we noticed it was a juvenile ! A Leopard cub being chased by wild dogs is such a rarity that we just couldn’t thank our lucky stars. Unfortunately for us, the action was happening in the east with the sun directly in front of us and behind the Leopard, making photography literally impossible. We watched the action with pounding hearts as the Leopard cub climbed up the treetop and then as soon as the Dholes moved away, it climbed down with the same intensity. I was cursing myself for missing photographing the action; I should have at least gone for silhouette shots, which I didn’t.

And as we looked on, what do we see – another Leopard climbing up a tree, about 25 feet away for the earlier tree! This was getting better. The Leopard was again chased by the Dholes, but being an adult it skilfully climbed up the tree where the Dholes couldn’t follow. This was a female Leopard and that’s when we realized what was happening. It was a family – a female Leopard and two cubs. They had been spotted by the pack of Dholes and were being hunted down; explaining the panic stricken Leopard cubs. Once the danger (Wild Dogs) cleared, the mother Leopard climbed down the tree and disappeared into the lantana, in search of her cubs. The Langurs continued to add to all this drama with their loud alarm calls. After a few minutes we realized that the Leopards were hiding in two sets of trees about 150-200 feet apart. But unfortunately we couldn’t see them.

In the meantime, the Dhole pack had run across the tracks in the opposite direction from where the Leopards were hiding. We followed the dogs to see what’s behind this unusual behavior and that’s when we counted them to be a pack of 22 Wild Dogs (about 8-10 adults and a dozen pups). The Dhole pack regrouped and once again went in search of the Leopards but this time they could not locate them and after a few minutes of searching, they gave up and disappeared into the lantana. There were atleast 10 jeeploads of tourists who were watching this rare wildlife moment unfolding in front of them and we were fortunate to have been in one of those 10 jeeps.

While the adult female Leopard stayed on the tree for a few minutes, all the time looking out for its cubs, we did get some photography opportunity – though it was completely backlit, we still think they are worth sharing. All images were shot with the D300, 300mm f2.8 lens mounted with the 2x convertor. I supported the setup with a small beanbag. 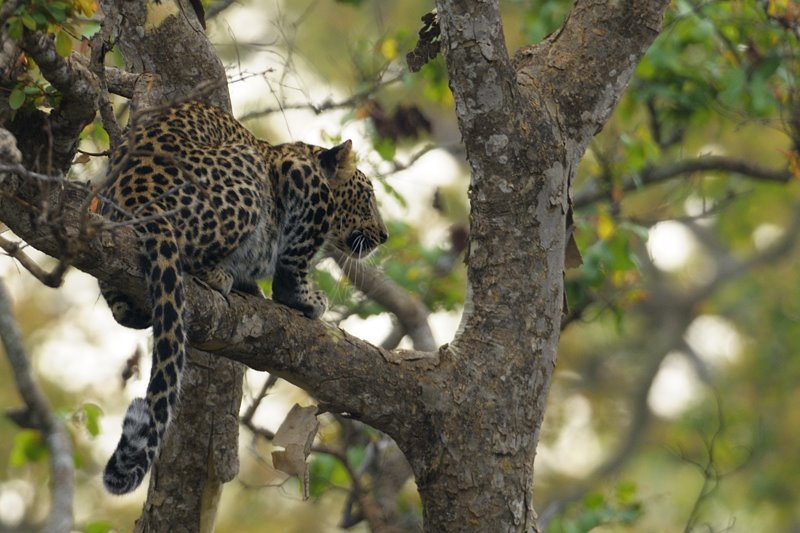 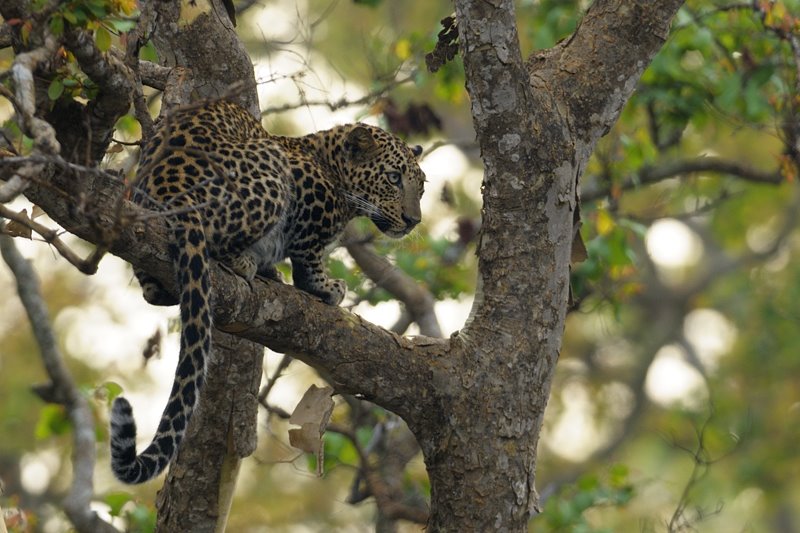 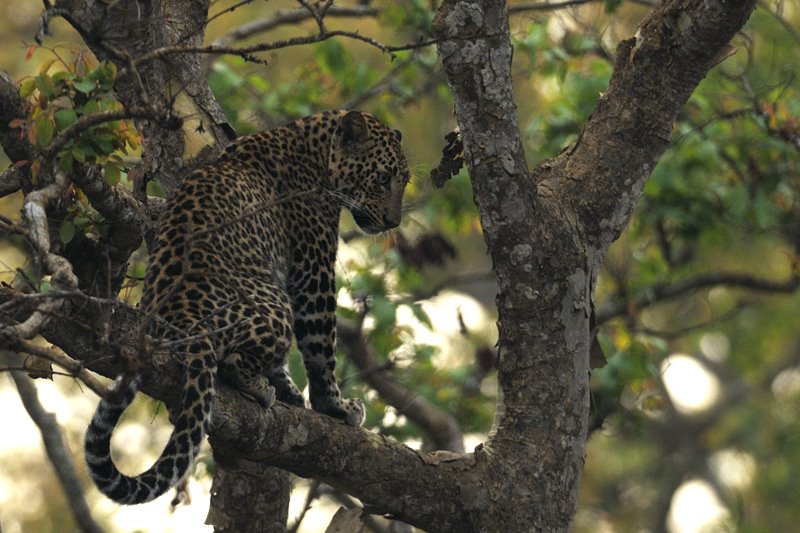 And when the Wild Dogs got distracted, the female Leopard came down the tree, I boosted the ISO to 800 and tried to keep the Leopard in the frame as depicted in this collage. 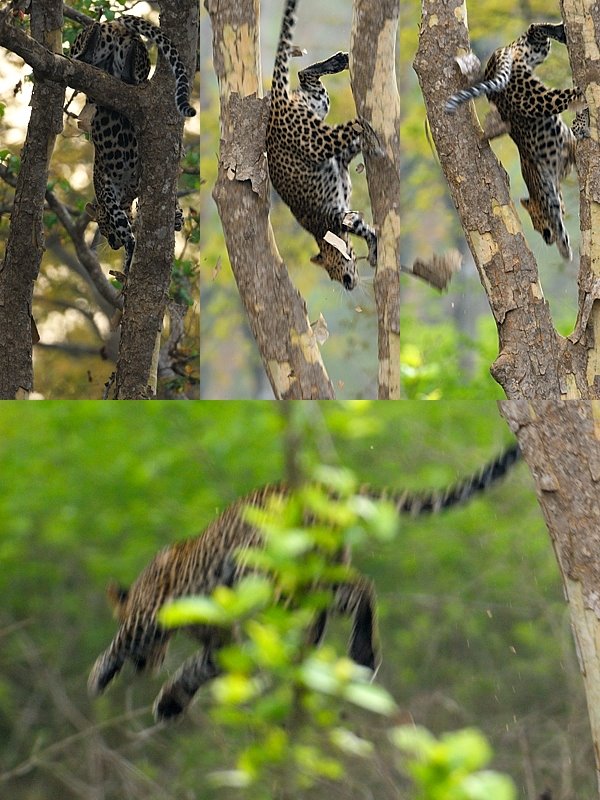