After the disappointing safari the previous day, we started this morning safari into Bandipur National Park with renewed hope. And in less than 30 minutes into the safari, we hit the jackpot. We spotted a pair of Scarlet Minivet foraging high up in the canopy. We have seen the Scarlet Minivet many times in the Indian wilderness, however, getting good pictures of them is challenging, since almost always they forage high up in the canopy away from the camera’s reach. The closest we came to getting good pictures was when we photographed a female Scarlet Minivet perched on a dead tree stump in Nagarhole National Park in 2008. But on this occasion the Scarlet Minivet was much closer and was focused on catching some insects on the lower branches of a tree. We kept shooting whenever the bird was in clear view and we got a few pictures that we could keep, like the one below. But our best picture was when we got the Scarlet Minivet in flight, which we used as the feature shot (above) of this post. 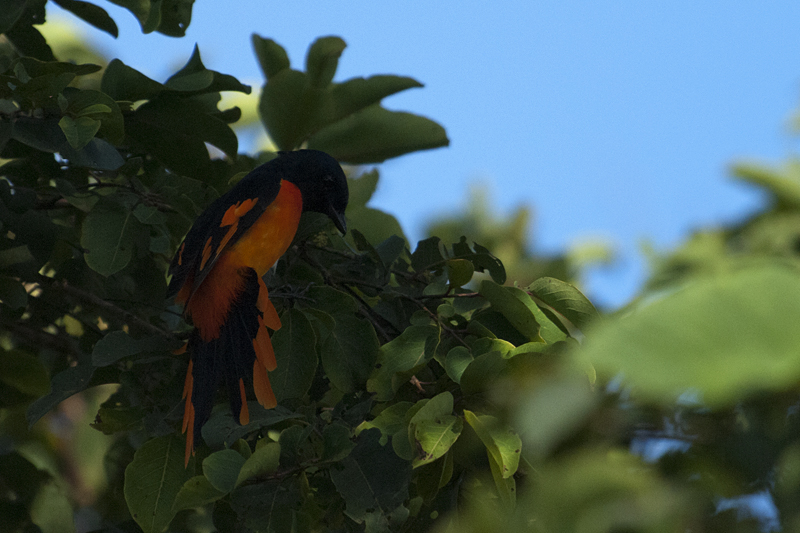 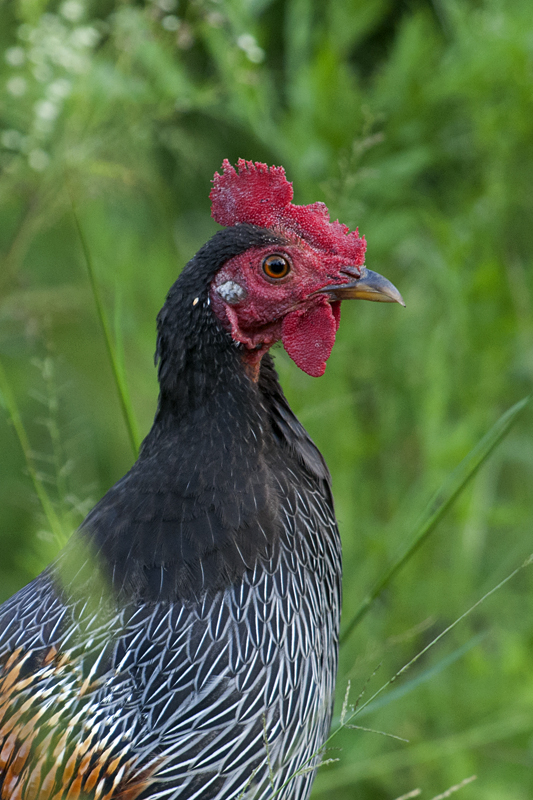 We moved on and soon saw a sub-adult Grey Junglefowl (above) foraging on the forest floor. We waited patiently for a few minutes to get a full frame portrait of it when it got closer. Likewise a Crested Serpent Eagle (below) was warming itself in the early morning sun giving us ample time to frame a portrait. At times Crested Serpent Eagles are perched motionless for long intervals scouting the forest floor for potential prey. 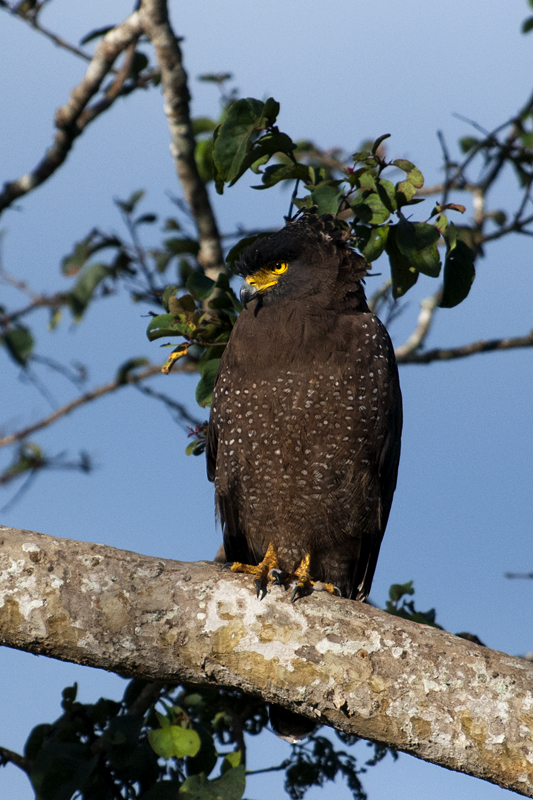 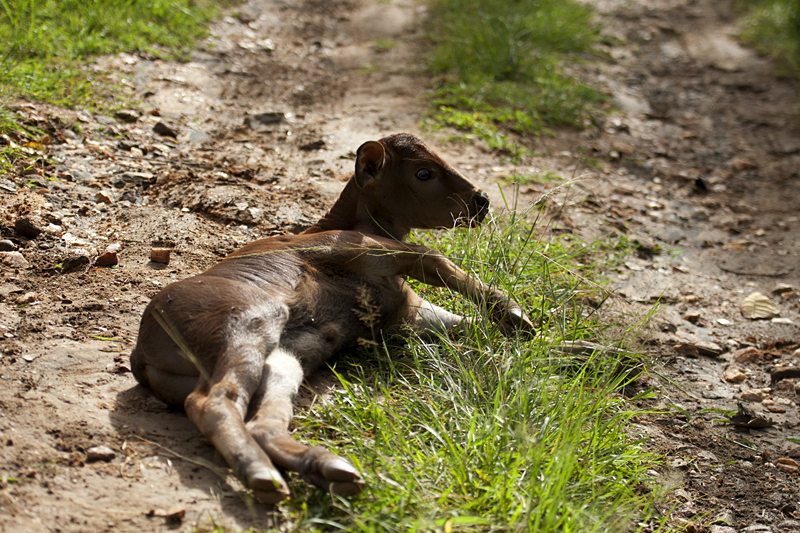 And towards the end of the safari, we were shocked to see a Gaur calf (above) lying in the middle of the safari road. As we got closer, we saw it frantically struggling to get on its feet, but its back seemed to be paralyzed for some reason. Our first impression was it might have accidentally collided with a passing safari Jeep, but we could not see any external injuries. Our guide pointed out that it might have tried to jump across the safari road on seeing an approaching Jeep and might have slipped, fallen and broken its back. It seemed this incident had happened a few minutes ago and our guide warned us to look out for the stressed out mother Gaur. When the calf cried out loud once again, the mother Gaur (below) emerged from the lantana and appeared visibly upset and got close to the calf to try to help it get up on its feet. But this was in vain. 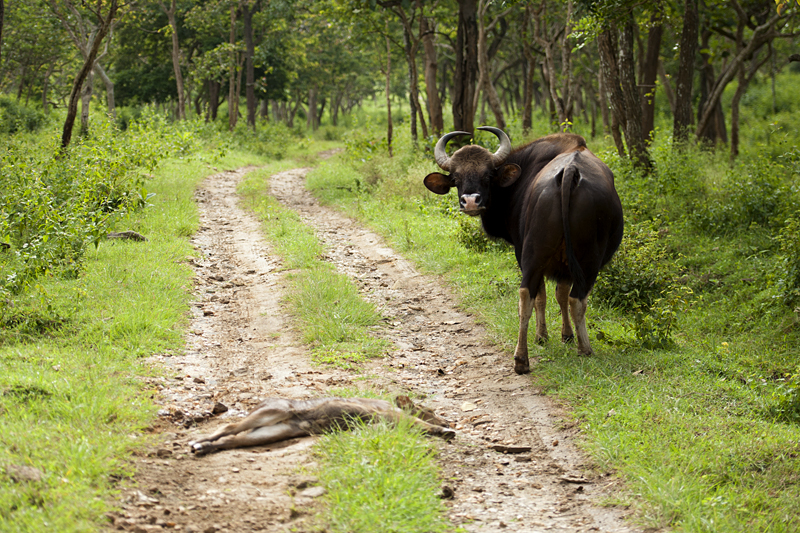 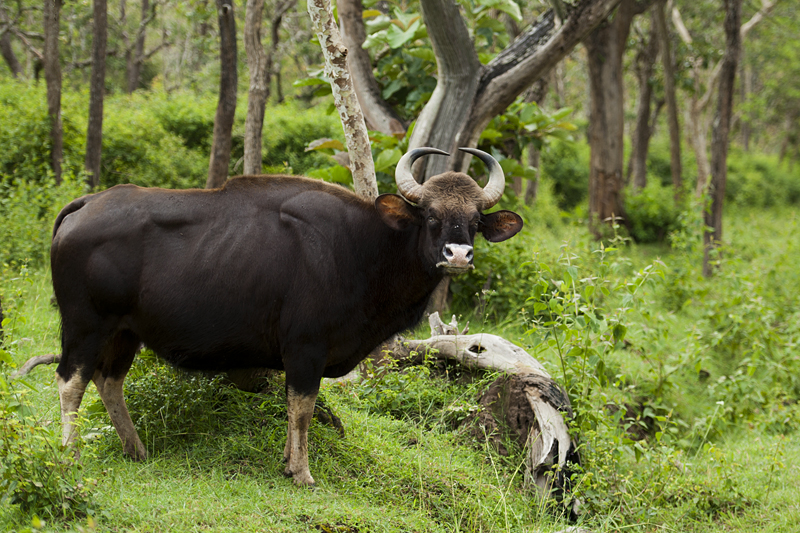 The trauma was unbearable to watch. Our driver made few calls to the Forest Department informing them about the injured Gaur calf so that they could get the Vet to have a look at it. We waited till we knew they were on their way. And then we left behind the struggling calf and the agitated mother Gaur (above) and proceeded to exit the Bandipur National Park to end what was surely an eventful morning safari.