After an exciting couple of days in Bandipur National Park where we sighted Leopards on consecutive safaris, we were riding high on our luck. We felt that now sighting a Tiger was surely on the cards. The earlier Leopard sightings served as an ice breaker with the other tourists who were travelling with us in the same Jeep over the last few safaris. The mood in the Jeep was upbeat as we started the evening safari harboring the hope of seeing a Tiger. The afternoon was very hot as we drove around aimlessly for about an hour with no luck. Then someone called up our naturalist and we got the good news of a Tiger sighting close by. We quickly dashed off to the location of the sighting only to see a few Jeeps waiting anxiously, but there was no Tiger. We were told a Tiger had indeed crossed the safari track and disappeared into the forest, giving a fleeting sighting to the Jeeps that were there at that moment. We wondered whether our luck had run out finally and had we missed out on a Tiger sighting in Bandipur National Park!

As minutes passed with no sign of the Tiger, one by one all the other Jeeps lost patience and left the scene. We were the last Jeep standing, hoping that the Tiger might just come back. After about 15 minutes, our naturalist indicated that there was a narrow gorge running parallel to this safari track and maybe the Tiger was resting there. And if we headed back about 100 meters, that gorge would intersect this safari track and there was a chance that the Tiger might emerge from there after a while. We said, what the heck, let’s give it a shot. As we crossed the intersection of the gorge and the safari track, our naturalist spotted the Tiger resting inside the Lantana (above), about 50 meters from the road. I got my record shot (below). However, the commotion in the Jeep, following the excitement of the sighting, unsettled the Tiger and it retreated back into the gorge. One dejected tourist in the Jeep said, “that’s it folks, the show’s over, we saw the Tiger briefly, but now its gone forever”. I was so convinced that we will get a good sighting of this Tiger that I took a bet with that tourist that this Tiger will return and leisurely cross our tracks, and we will get a fulfilling sighting. 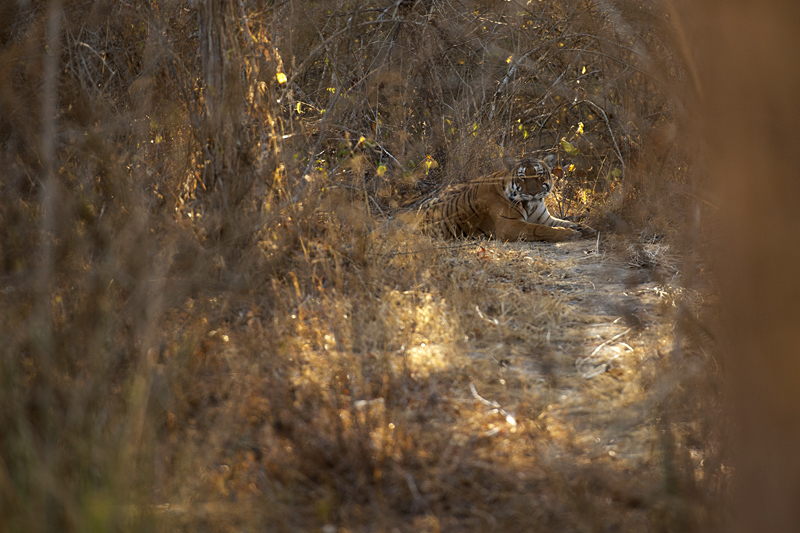 Our naturalist indicated that it was now clear that the Tiger had actually come to this intersection to cross the safari tracks to head to a nearby waterhole. Unfortunately that waterhole was deep inside the Jungle with no access roads, so this intersection was probably the last point to see this Tiger again before it disappeared from our sight. So we debated our strategy for a couple of minutes and then the decision was made. We decided to drive further for about 100 meters and then switch off the engines, wait for a couple of minutes and then silently roll the Jeep quietly back to this intersection. There was a chance that this Tiger might think we had left and muster the courage to come back onto the safari track and then cross over to the other side and head to the waterhole.

We drove up the road, switched off the Jeep engine, waited for a couple of minutes and slowly rolled the Jeep and approached the intersection. And almost immediately we spotted the beautiful Tigress (below) emerging from the Lantana walking towards us. 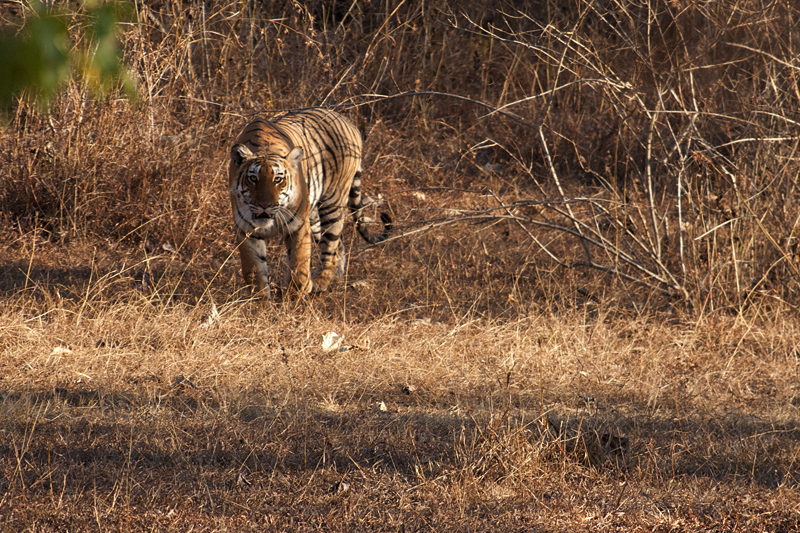 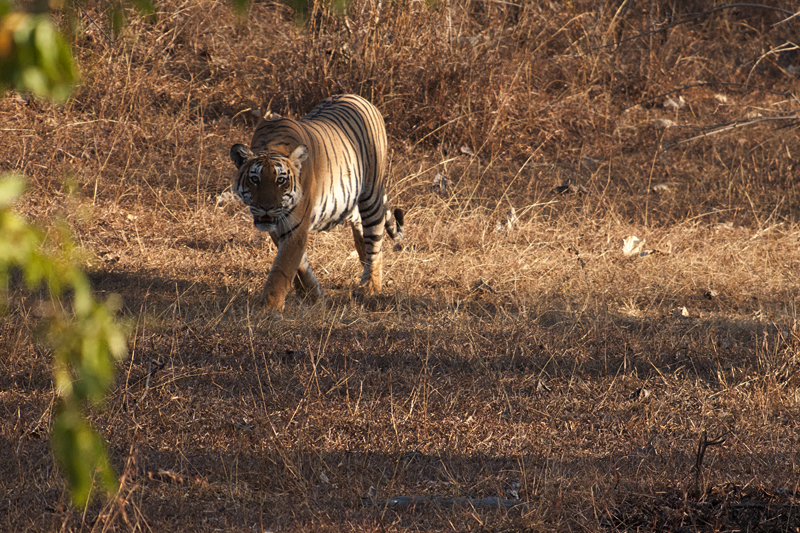 It came into the clearing (above), paused for a minute before crossing the safari track. It then emerged from behind the Lantana on the other side (below). All the way the Tigress kept its gaze fixed on us, all the time.

Before heading off in the direction of the waterhole, it gave us one final glance (above). Everybody was elated that our patience and strategy had paid off handsomely. And not to mention, I won the bet! In the end, everybody was extremely happy and satisfied with an amazing Tiger sighting. Interestingly this sighting broke the jinx of the previous Tiger sightings at Bandipur National Park, when the animal would either be sleeping, or never look back at us.