Animals of India #63 : Snow Leopard – In search of the ‘Ghost of the Mountains’ 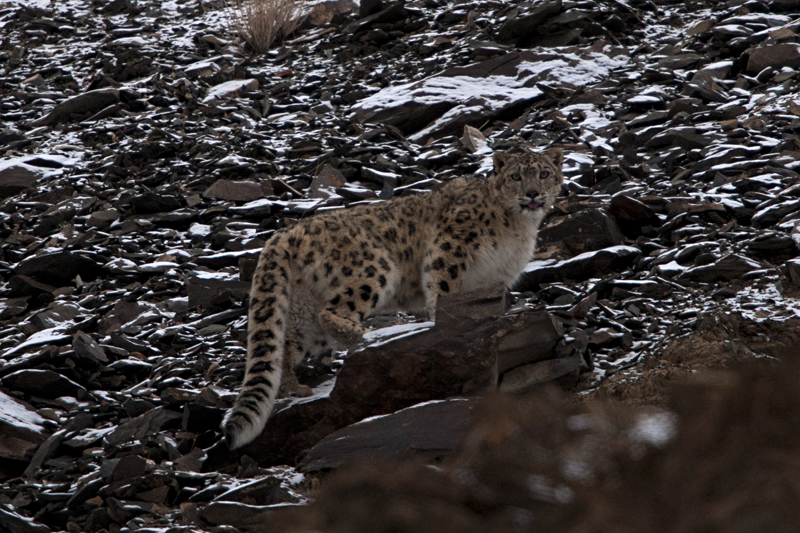 Visiting the Hemis Wildlife Sanctuary in Ladakh has been on our list of things to do for a while now. So when our friends from Camp Forktail Creek suggested that we do so in January 2012, we jumped at it! We decided to spend the first couple of weeks of the new year there searching for the elusive Snow Leopard or the ‘Shan’ as called by the locals. We were warned that in January we would encounter the harshest weather the region has to offer, given the fact that it is right in the middle of the winter season. Heavy snowfall and wind chill, which would lower  the temperature to well below -15 to -20 degrees centigrade was a given fact. We specifically chose this time of the year for the trip since these harsh conditions makes the Snow Leopard come down to lower regions in the Sanctuary that are in the altitude range of 3700 to 4500 meters above sea level, thereby improving the chances of sightings.

We started our trek from the Zingchen entry point after a few days of acclimatization in Leh. A couple of hours of trekking took us to our camp site that was situated in a narrow valley in the Rumbak region of the Sanctuary. Camping in the middle of the Hemis Wildlife Sanctuary with a basic Marmot tent for accomodation, headlights and LED lights for lighting, the frozen ‘Rumbak’ nala as the water source and ‘Siachen’ sleeping bags (Goose down sleeping bag) gives you a picture of the adventure that we had set ourselves up for! 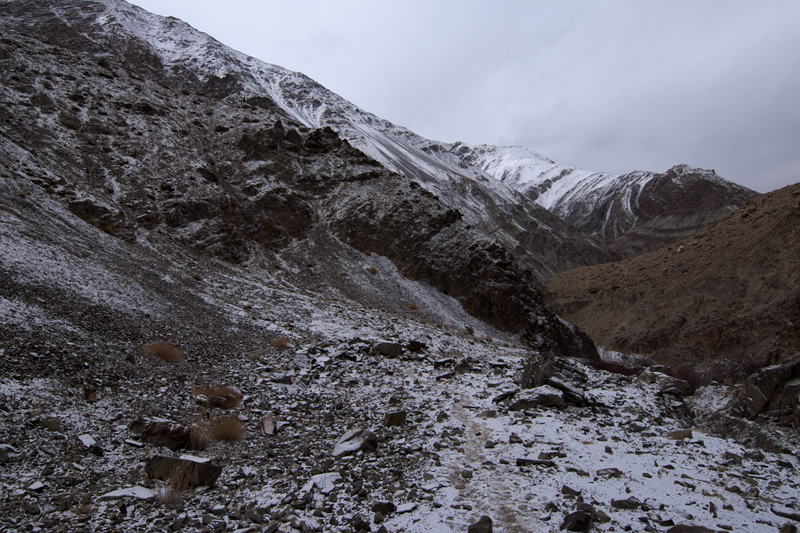 The constant snowfall, cloudy skies and the vast rocky mountains made the task of spotting wildlife almost impossible. We trekked everyday with the positive mindset that we would surely spot the ‘Shan’, which for all you know, could have been crouching just a few feet away from us. But because of the way the beautiful animal is camouflaged in the dazzle around us, we could have missed it. The second day of our trek, we traversed the Husing Valley trail and almost immediately came across a herd of Blue Sheep (locally called the ‘Bharal’), the main prey of the Snow Leopard. After a lovely photo session with the ‘Bharal’, we proceeded further along the Husing Valley. Just then we sighted a couple of Blue Sheep further down the trail, who were ignoring us and looking upwards intently towards the mountain. Our view was blocked by a ridge and we quickly went towards them to see what had grabbed their attention. Just then one of the sheep gave an alarm call. Our guide Khenrab, who was constantly scanning the landscape around us quickly moved towards the ridge. Instinctively we all knew that there was a predator around. We were excited! It could be either be a wolf or it could be the Snow Leopard.

Khenrab who was ahead, came running, gesturing wildly at us to walk faster. As we reached closer to the ridge, we saw what we had been waiting for – a beautiful Snow Leopard slowly climbing up! You could imagine the excitement around! The beautiful ‘Shan’ slowly moved upwards, stopping a couple of times along the way, giving us a chance to observe and photograph it. Finally, it reached the top of the mountain and paused to scan its territory, giving us a chance to get the last image and then it mysteriously disappeared behind the rocks, thereby living up to its name – the ‘Ghost of the Mountains’. 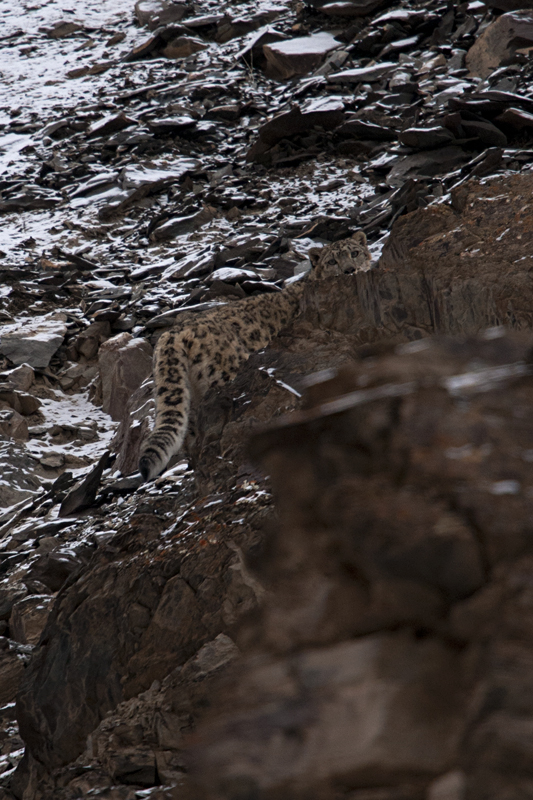 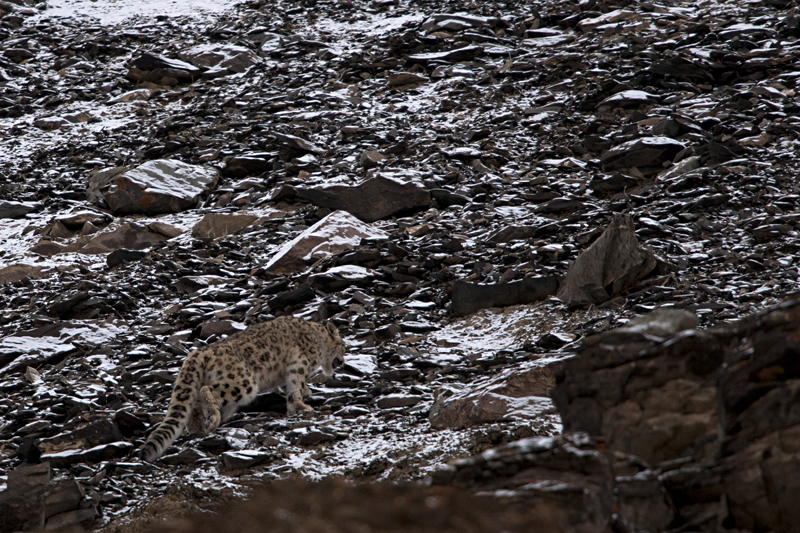 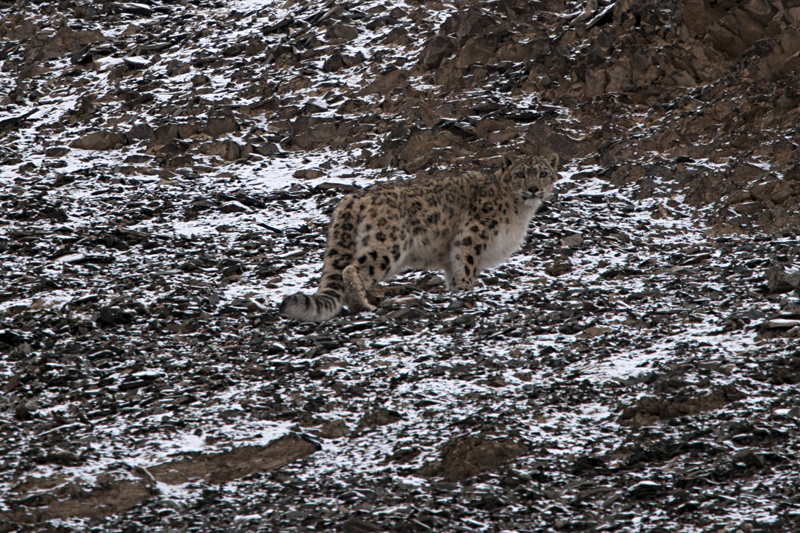 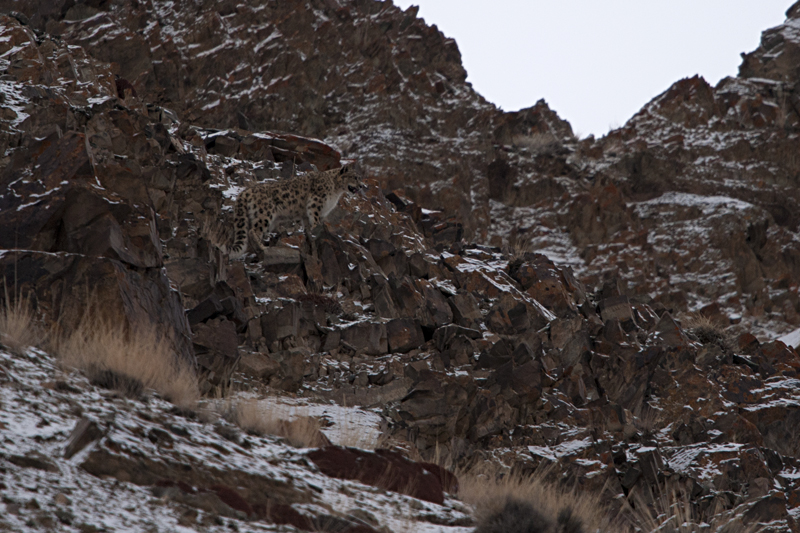