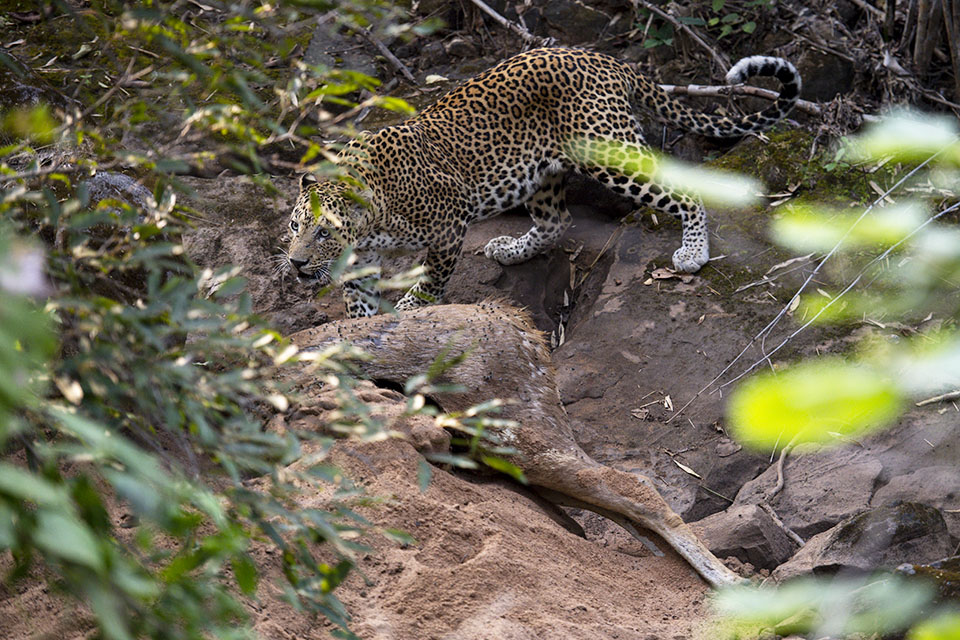 While on a safari in the Satpura National Park, we first saw the Sambar Deer kill lying close to the road, and one of the safari guides informed us that this was a kill made by a Leopard. They also cautioned us that the Leopard was known to be very shy and it must have scuttled away when the vehicle got close. So armed with this information we decided to stake it out for a while. After a few minutes of waiting, we heard the Leopard growl. At first we thought this might be a Leopardess with an impatient sub-adult cub. We thought every time the cub disturbed its mother, the mother would growl to maybe ask it to stay quiet till we, the waiting jeeps, left so that it could come out of the hiding and feast on the Sambar kill. We waited more than thirty minutes, but for the occasional growls, the Leopard refused to come out of its hiding. The terrain was rocky and the forest cover was thick. We moved a few yards ahead, and that’s when we got the first glimpse of this huge male just sitting on a ledge and waiting for us to move on. He was so beautifully camouflaged that it took some spotting to get a fix on him and once we saw him the picture got more clear. This wasn’t a mother and cub combination, but a mating pair and the Leopardess was growling every time they mated. The Leopardess was well hidden and we could not spot her. However, very soon the Leopard slowly descended to the Sambar carcass. And this was all we needed as it made our long wait wait totally worthwhile.