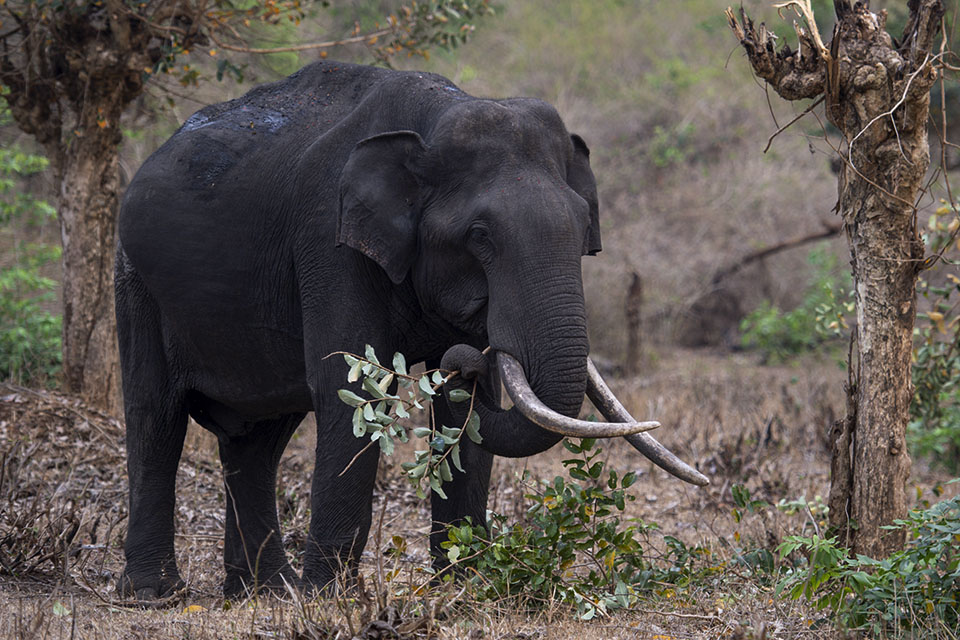 We chose to drive into the Kabini backwaters zone on this afternoon drive. We drove all around the Kabini backwaters with no sightings. Towards late afternoon we heard alarm calls of Chitals and Langurs. We were soon joined by a couple of more jeeps. Our guide pointed out that three Tiger cubs, all sub-adults were seen around this area. They would have been moving around and spotted by the Deer and hence the alarm calls. The prospect of seeing three Tigers was too exciting to let go and we waited. The Langur alarms calls were persistent and kept getting louder indicating that the Tigers are visible from the canopy of trees. But we were struggling to spot them given the thick Lantana bushes. Almost after an hour of waiting the monotony was broken by this huge Tusker that came along, foraging. For the few minutes he was around, he gave us cool photo opportunities, but at the same time, he also scared away the Tiger cubs deeper into the Lantana bushes.

After a while the Elephant went away towards the backwaters, but It was soon time to leave the park and as we headed towards the exit. The Chital and Langur alarms calls were back and in the dim light of the evening, we got a fleeting view of Tiger cubs as they emerged in a clearing in the lantana, while they headed deeper into the thickets.