Following a Cheetah and her cub in Masai Mara 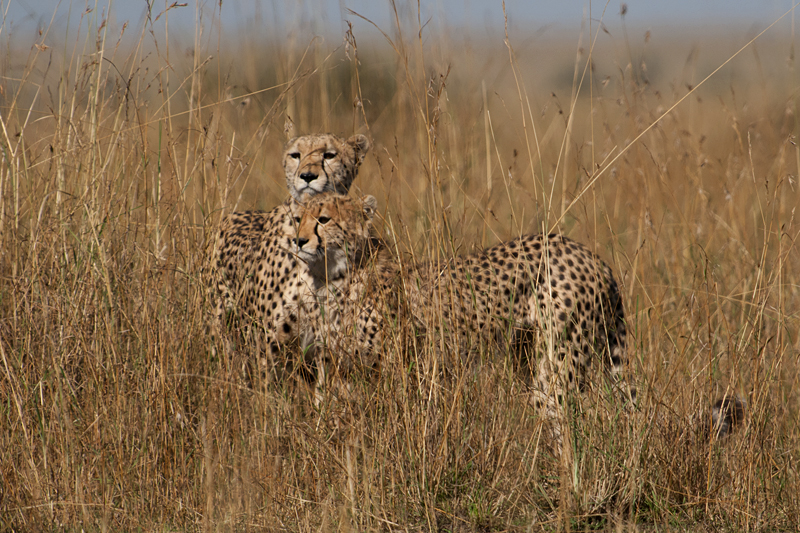 What could better the morning’s Drama at the Buffalo kill! That’s what we thought. However, Masai Mara had something equally exciting in store for us on that evening safari. We were approaching a major crossing point when we saw a few tourist vehicles waiting by the side of the road. We knew by previous experience that they were seeing a cat, only thing we didn’t know was the species. As we reached the location we saw a beautiful Cheetah sitting in the tall grass close to the safari road. As we were watching the Cheetah, another sub-adult Cheetah joined in (above). That’s when it dawned on us that we were watching a Cheetah mother along with her sub-adult son. After a few minutes of waiting, the mother Cheetah crossed the road a few Jeep lengths in front of us and the son followed suit. They settled in the tall grass (below) on the other side, not far away from the road. 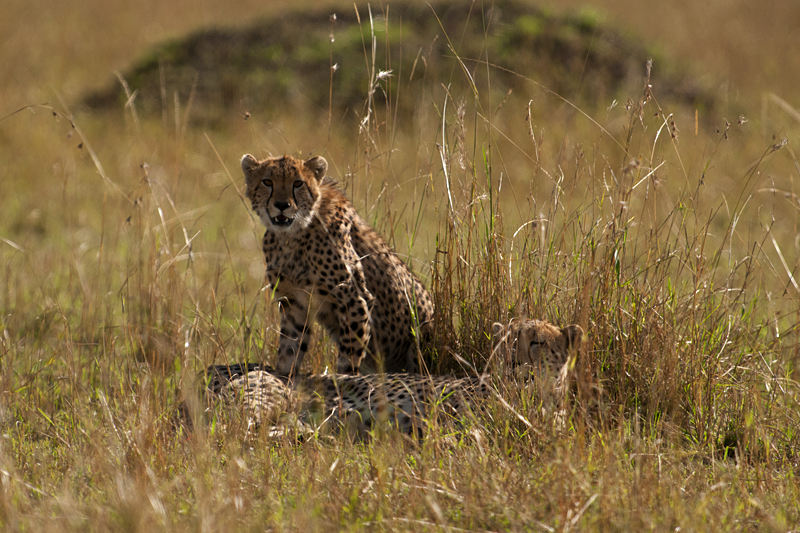 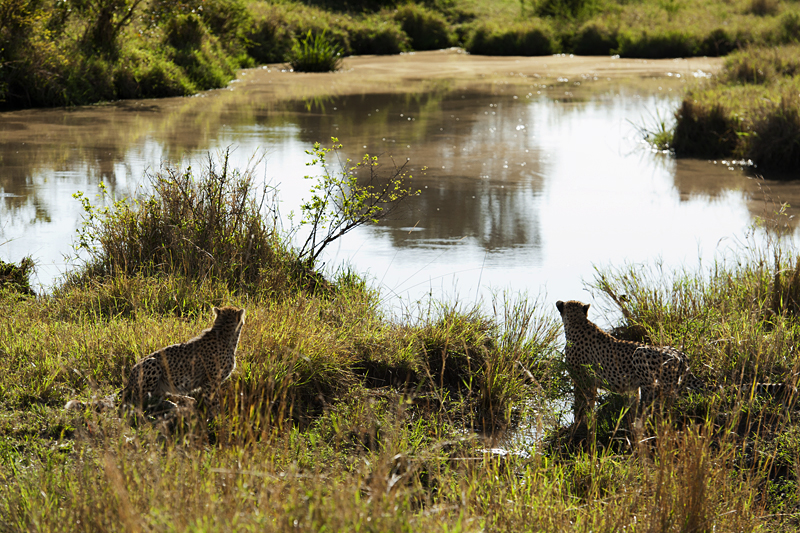 The late afternoon sun was beating hard on them, but they were intently looking at something, presumably a herd of Gazelles in the distant horizon. If the Cheetah had decided to stalk the Gazelles, it was game over for us since there was no way of following them given that no off-roading is allowed in Masai Mara. Soon the mother got up and walked to the nearby waterhole, with the son following her at a distance. Given the number of Jeeps that was around, the mother was careful to keep the youngster in her sight all the time. After quenching their thirst (above), the Cheetah family changed their mind and instead of going after the Gazelles, they came back towards us giving us an opportunity for some full frame portraits (below). 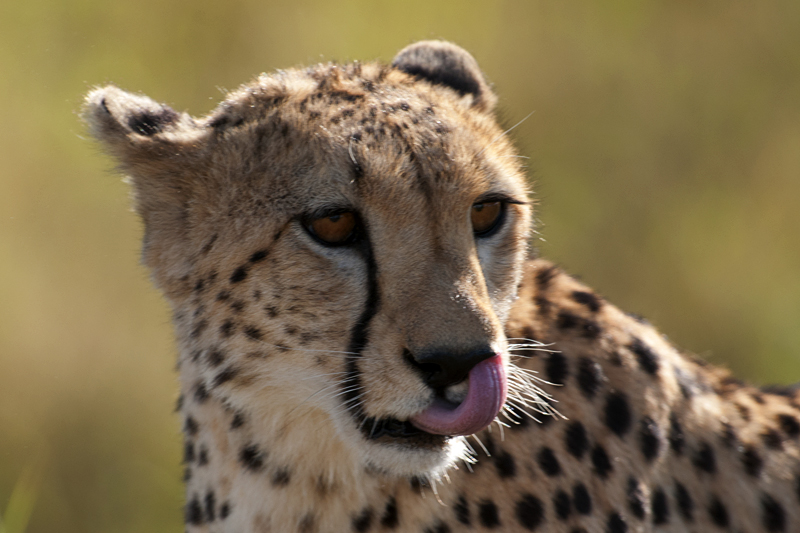 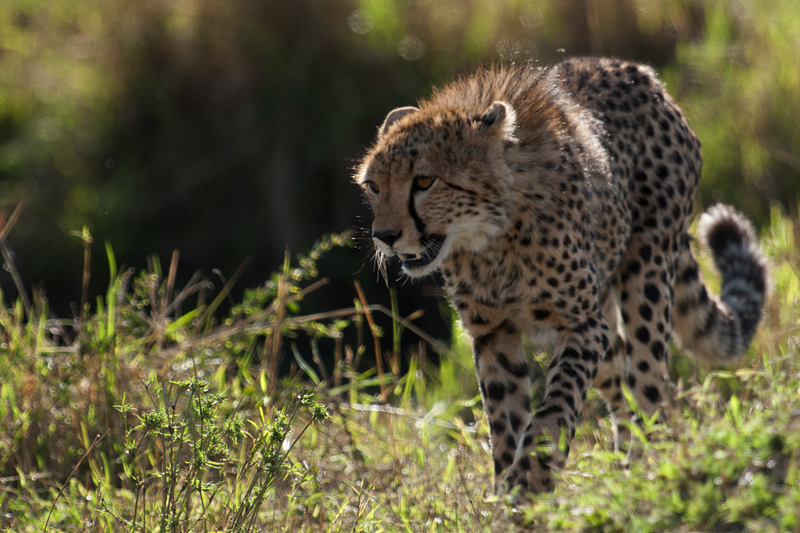 You can clearly see the subtle differences in appearance between the mother (previous image) and the sub-adult cub (above). As they went past the Jeeps, (adding to our excitement), we got another full frame of the cub (below). The mother and cub found a Termite hill (feature image) not far away from the Jeeps and settled down to contemplate their next move. As that happened, the ranger asked the Jeeps to disperse since many had converged at the scene of these Cheetahs. 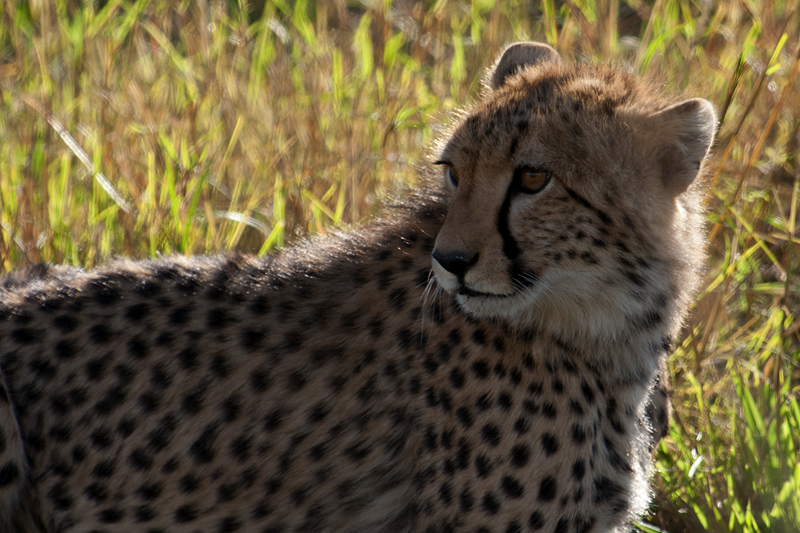 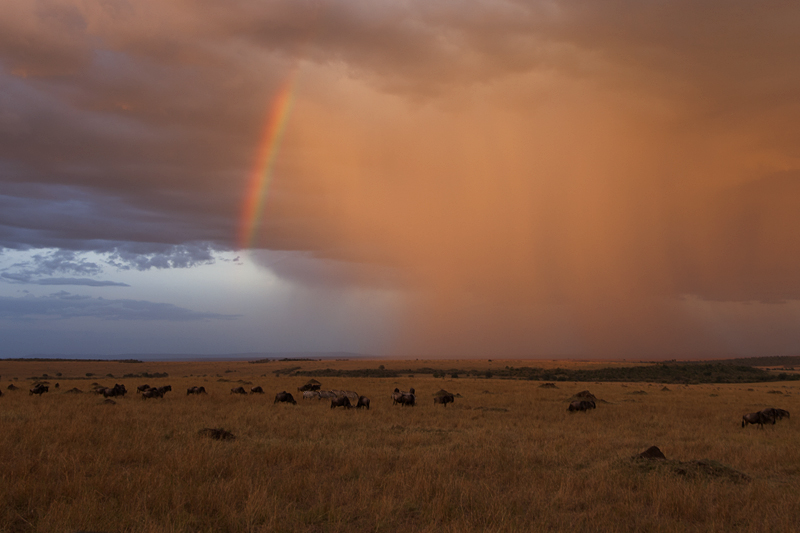 It was time anyways to head back to the lodge. We were very happy that we spent the evening with the Cheetah mother and son. Soon we returned back to lodge, not before capturing Wildebeest grazing in the Masai Mara plains with the rains and rainbow (above) in the background.