Golden hour with a Pride of Lions in Masai Mara

After witnessing the spectacle of migration, we moved deeper into the Masai Mara Reserve. That’s when we came across an African Elephant with a calf. At first glance it looked like the calf was just cuddling into the mother. But when we got closer we realized that the little calf was actually suckling (below). After observing the mother and calf for sometime we moved on, only to hit jackpot twenty minutes later. The feature image (above) is the final act in the drama that unfolded in front of our eyes. 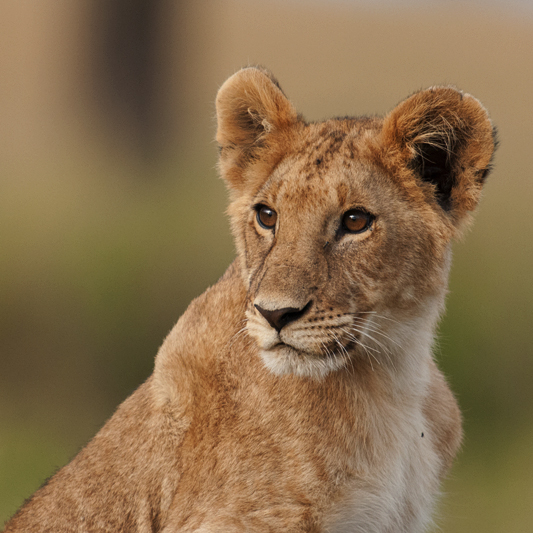 When we reached the location, there were already a few safari vehicles watching these Lions relaxing in the late evening sun. The pride was scattered around a termite mound and couple of sub-adult Lions were using that as the lookout post. Soon, one of the sub-adults got up and looked intently (above) at something in the distance. He scanned the horizon for a while and then went back to relaxing. Soon it was the turn of another sub-adult to take up sentry duties. It gingerly came up onto the termite mound and looked around for a couple of minutes. Then it too settled down along with its sibling and went back to gazing into the Masai Mara horizon (below). Clearly this pride had sub-adults only, which meant that the adults were all out on a hunt and returning soon. 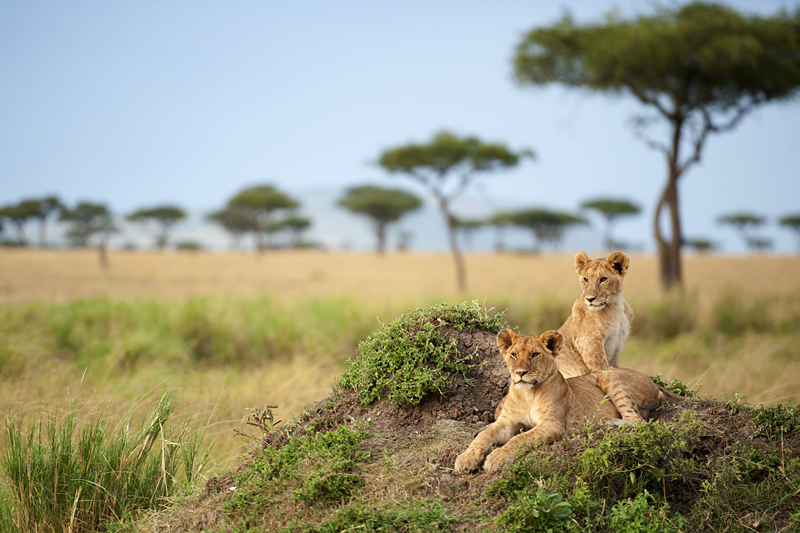 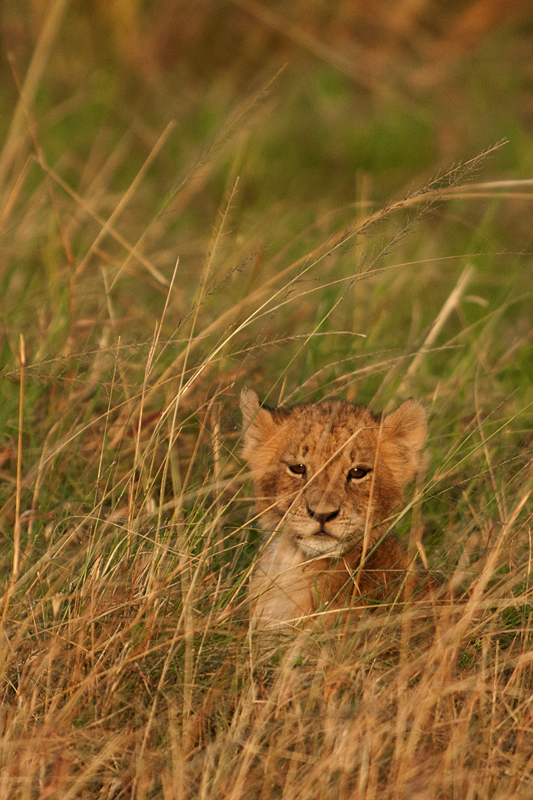 Even though most of the sub-adult cubs were resting, their constant shuffling around and repeated scanning of the Masai Mara horizon gave us many photo ops. Suddenly something moved in the tall grass at the base of the termite mound. We saw a small head pop out (above) of the tall grass and to our pleasant surprise, it was a cub (maybe a month or two old). Soon another cub popped (below) from behind the termite mount and then there was another. The surfacing of the young cubs brought lots of aahs and oos from the tourists. 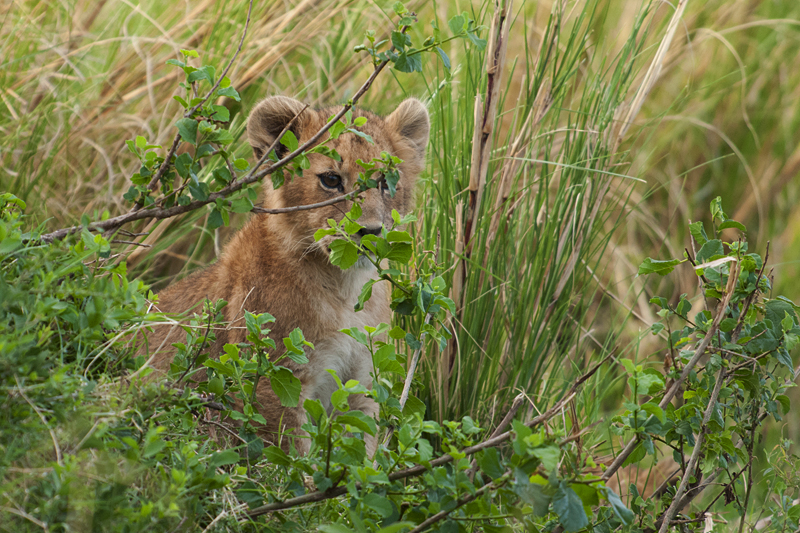 We soon understood the reason behind the restless cubs coming into the open when the matriarch appeared from nowhere. And one snare from her set the Lion pride in action. The Lioness scanned the horizon (below) from a neighboring termite mound before moving towards the cubs. 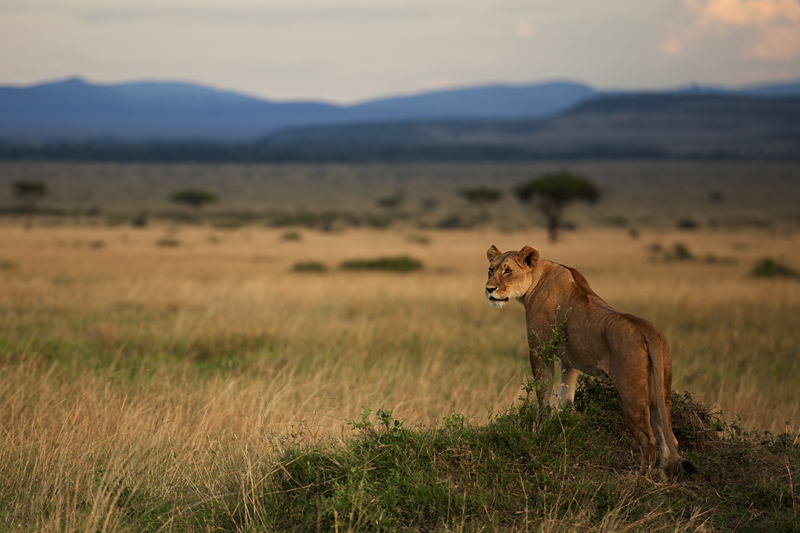 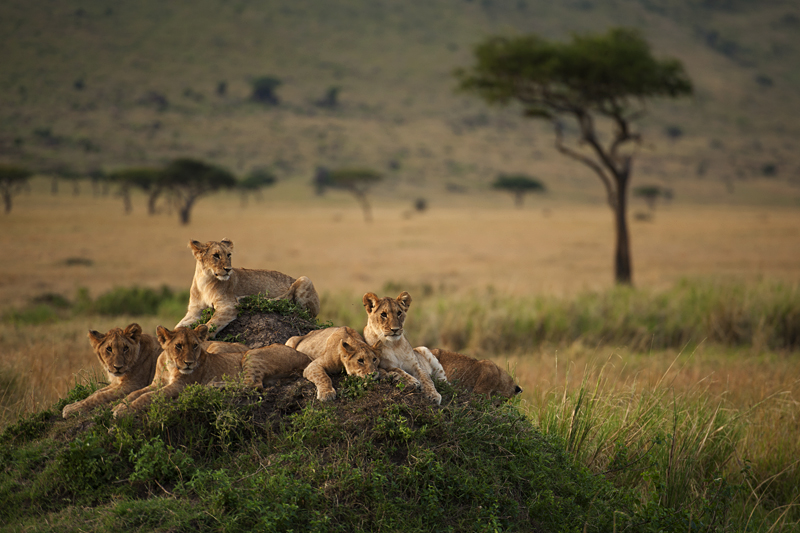 With the arrival of the Lioness, a sense of safety and security come over the entire pride. The sub-adults now relieved of their baby sitting duties settled together in a huddle (above) on the termite mound to enjoy the cool evening. The younger ones on the other hand confidently moved into the open for their evening playtime(below). 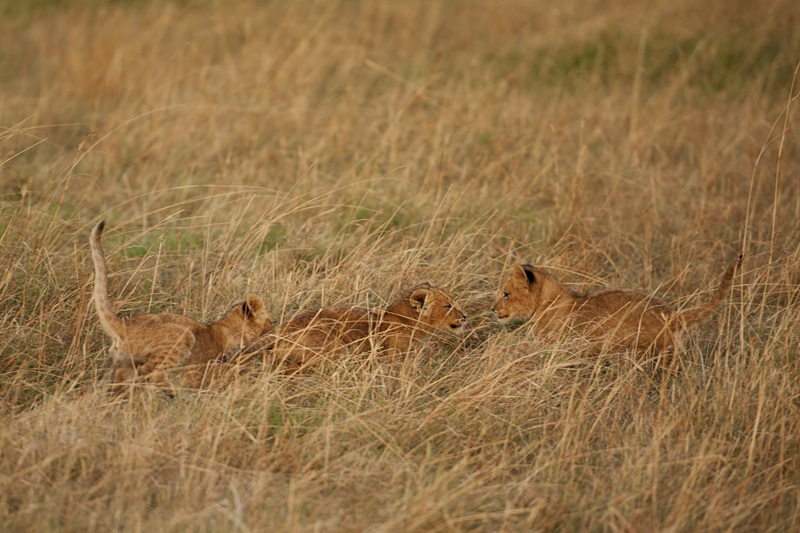 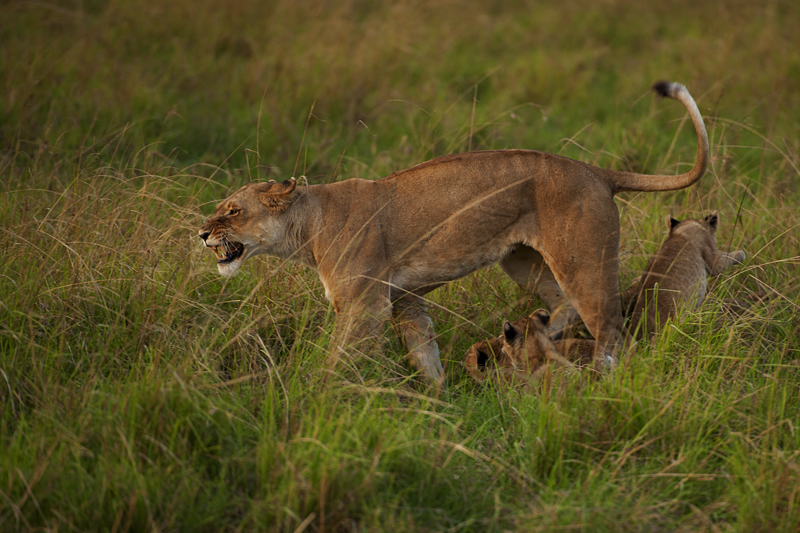 After playing amongst themselves for a few minutes, the brats went on to play pranks with an older sibling, who made her frustration clear (above). Soon the matriarch came by and the cubs marched behind her (below) and the older siblings settled down near the waterhole close by. One of our best sighting of African Lions in golden hour that I can recall was in Serengeti National Park described in Dancing with African Lions. 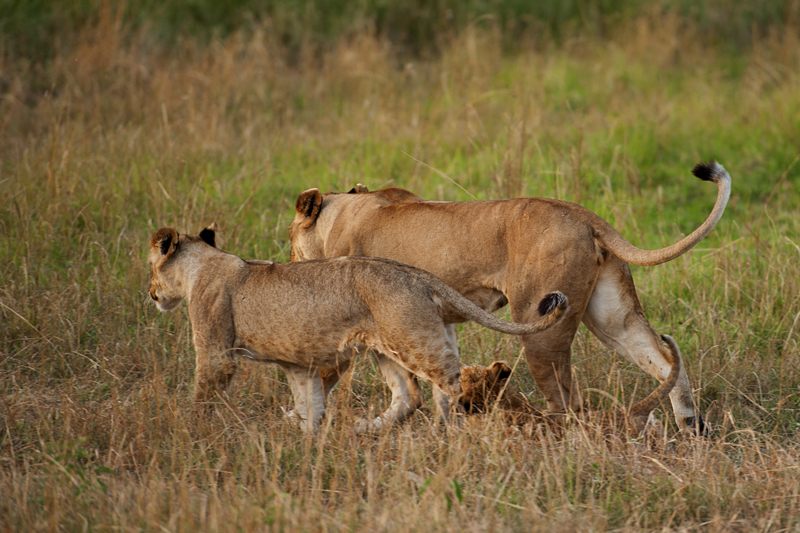