We had a chance encounter with Dhole at the Nagarhole national park in Karnataka, India. This turned out to be the highlight of our wildlife journeys’ till date.We were on one of my many safaris’ in the sanctuary when we heard a wireless message informing us of the sighting of Dholes. Though we had photographed them many times in the past, every encounter in the wild is unique and exciting and we requested the naturalist to take us to that location in the national park.

When we reached the place, we saw no Dholes but a lone jeep parked bang in the middle of the game tracks. I felt a twinge of disappointment that I missed an opportunity to get some  animal pictures. But then the naturalist pointed to a fresh Chital (Spotted Deer) kill by the side of the game track. I was now excited as I was sure the Dhole would return to claim their kill! I didn’t want to let go of this rare opportunity and setup my camera equipment quickly (a Nikon D300, Nikon 300mm f/2.8 with 2x TC, Manfrotto tripod with Wimberley head) and waited.

Within minutes, a pack of eight Dholes appeared charging towards the kill! What followed next was a feeding frenzy that I had never ever witnessed in the Indian national parks. Here’s the action as it unfolded, thanks to the many animal pictures that I shot. 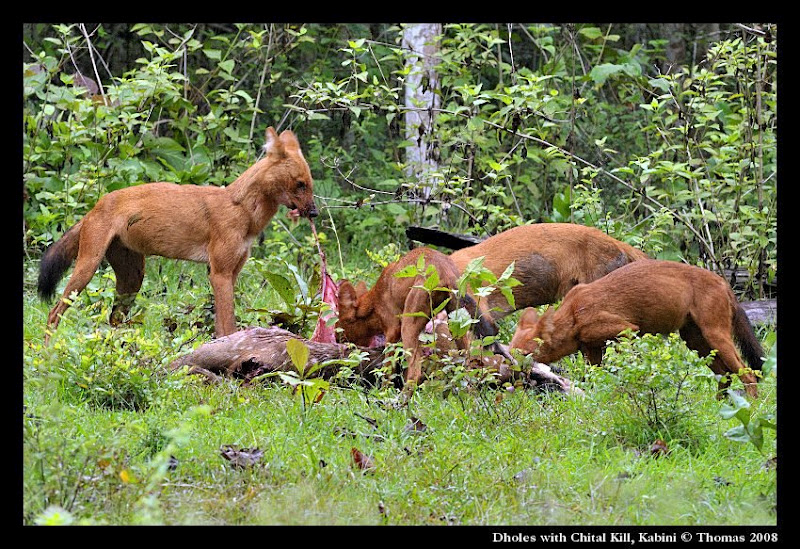 To start with, utter chaos prevailed. All eight wild dogs were growling, jostling for position, shuffling and trying to get their first mouthful. The Dholes were tearing away at the carcass, devouring the kill at a frantic pace. For a moment I wondered, amidst all this confusion how would I capture the action that was unfolding. My D300 was firing away continuously like a AK47!Thanks to their feeding frenzy, the Dholes were not bothered about the jeeps or the photographers like me who were elbowing each other for perfect angles to catch the action. Amidst this frenzy, I spotted one Dhole trying to rip-off some parts of the Chital – I kept my camera trained on it. As I watched, I saw him rip off the heart & lungs of the Chital!! He came running towards the jeep, away from the pack. I guess it wanted to enjoy his meal in peace. It was an awesome sight watching this Dhole run towards us with the Chital’s heart in his bloodied snout! 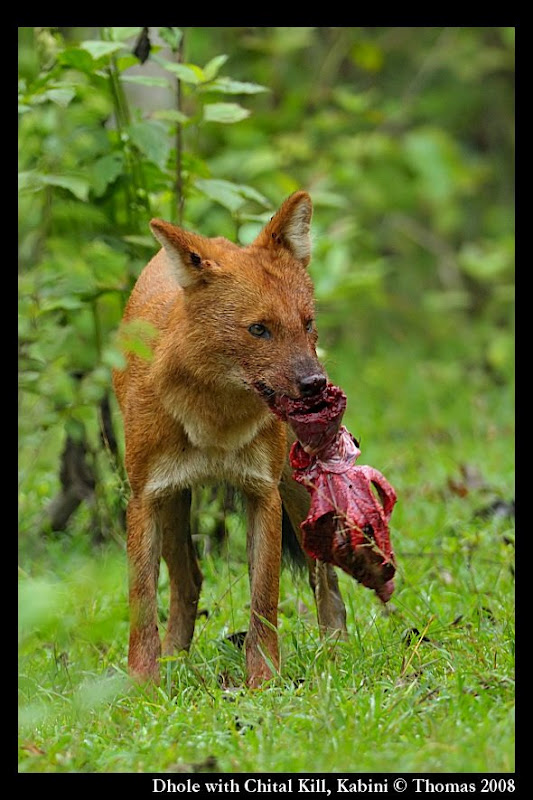 Raw nature can be gruesome at times, but that’s the way of the jungle…it is survival of the fittest..Viewing this scene through a 600mm (300mm + 2x TC) telephoto lens gives a tremendous adrenalin rush as you are that much more closer to the action.I thanked my lucky stars for managing to get this shot before the Dhole finished its snack in just a matter of seconds.

The Chital carcass was almost half eaten in appox. 10 mins and the pack seemed to be taking some kind of a breather. I used the time window to change my position, lens, camera angle etc as quietly as possible. I wasn’t that subtle after all. My lens changing antics and shuffling attracted the attention of the pack. And for the first time during the meal they took cognizance of the presence of mortals around them. They seemed to get a bit annoyed at our presence. I waited as usual for something exciting to happen. I was rewarded with this “DO NOT DISTURB” look that I gingerly accepted with a burst of frames from my D300. 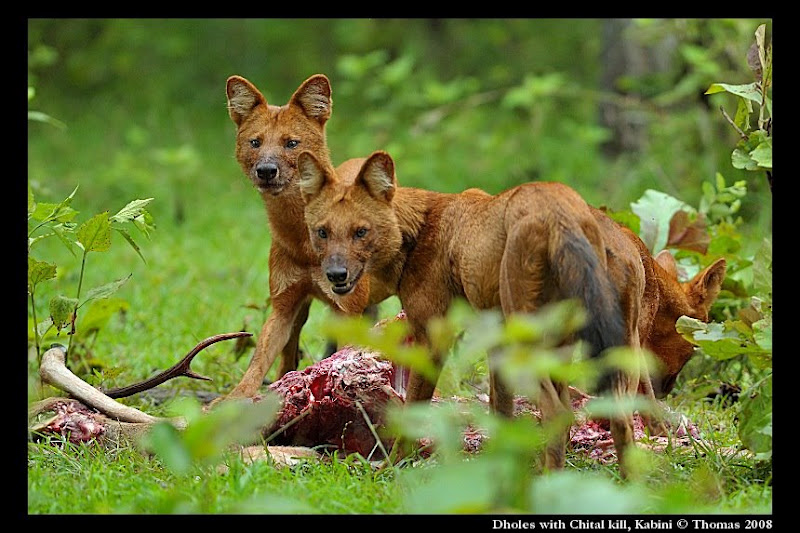 During the 20 minutes, the Dholes kept taking turns – either devouring the kill and or otherwise patrolling. After gorging its heart’s fill, this Dhole religiously went on to take its designated position amongst the patrol squad . At any point in time during the feast three Dholes kept a watch around the invisible periphery of the kill zone while the rest of the Dholes took their turn at the breakfast table. 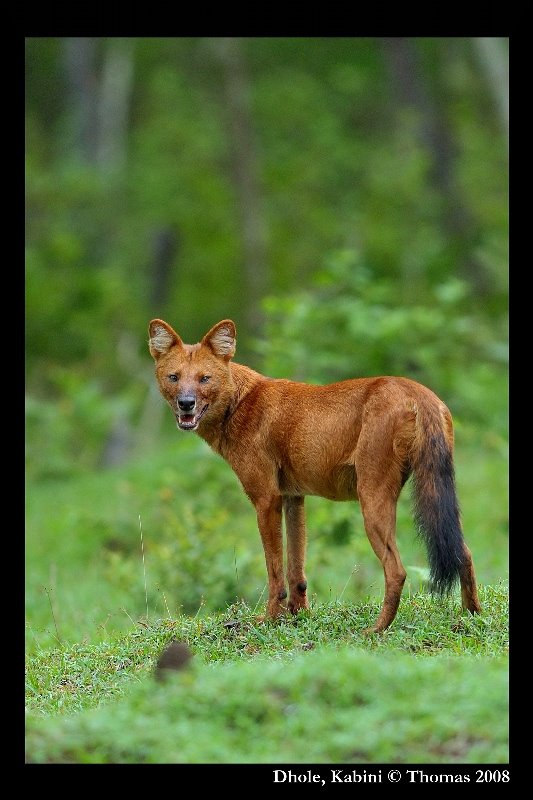 Though it seemed as if there was utter chaos while all of them were feasting, I realized that there was a tacit team order when it came to feeding, patrolling etc. This team order was strictly adhered to by all members of the pack. 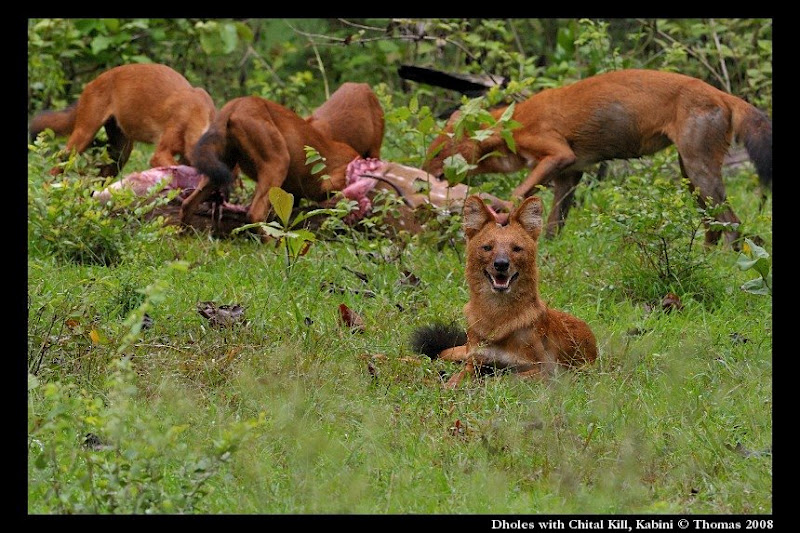 I guess the secret to their success and survival of the Dhole pack is this cohesive teamwork demonstrated by an unwritten protocol. Having mentioned team orders and unwritten protocols in the Dhole pack, there was one team member who broke all these rules. This was the Dhole cub, which incidentally was the only juvenile in the pack. It was a joy to see this cub go all over the place trying to get piece of the action. 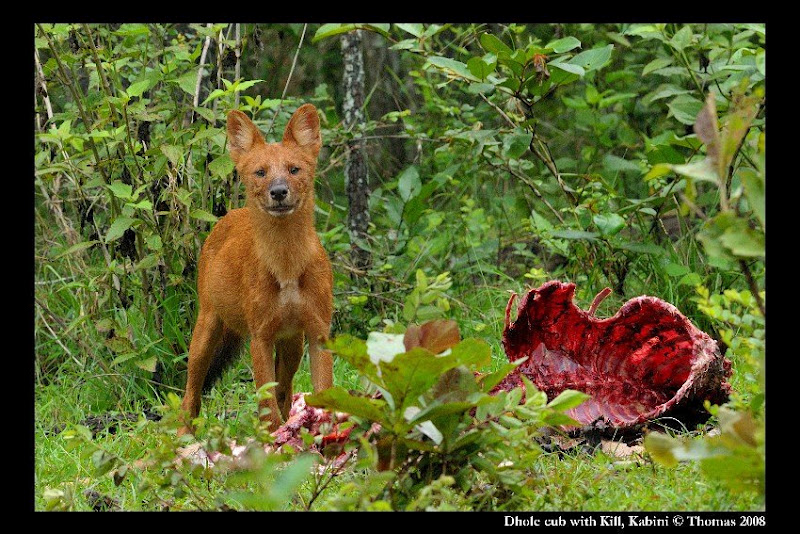 I noticed that the other Dholes seemed to be tolerating this cub’s antics very patiently. It pays to be the youngest of the lot! Every now and then I kept a track of this cub and finally got this. When all of them had done with their breakfast and were ready to move on, the cub gave me this “Last man standing” innocent pose with the bared to bone carcass-yet another memorable moment that I was fortunate to capture.

In summation, it was a thrilling experience for me to observe and photograph this awesome wildlife encounter at such close quarters. I hope through this post, I was able to take you as close to the action as I was.