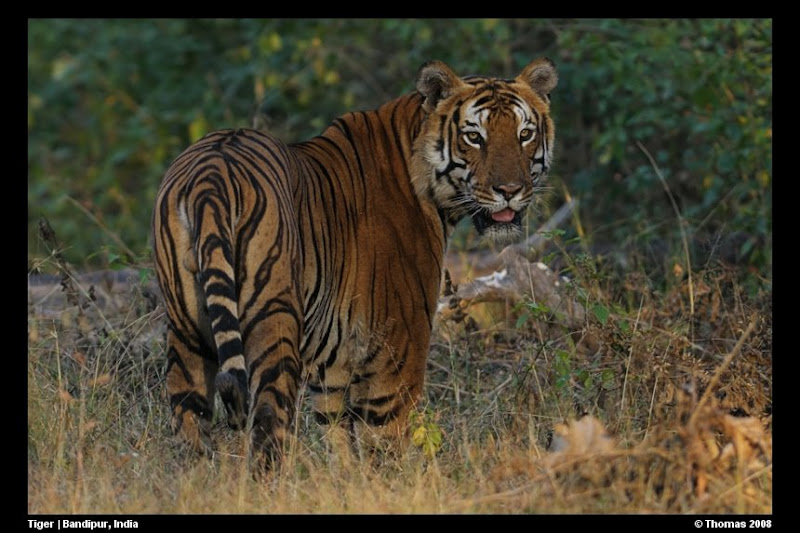 Our 2008 year end week long vacation in the Indian wilderness was spectacular and is one that we are going to remember and talk about for a long time. It is worth remembering as this was the first time that we were able to photograph the ultimate cat!

The probability of sighting Tigers are pretty high in North & Central India given the habitat of the forests in those parts. However, come down to South India and it’s a different story altogether. Sighting a Tiger here becomes a rarity given the dense forest foliage as compared to other parts of India. No wonder we have sighted a Tiger only three times in as many years and had not spotted one for the whole of 2008. Inspite of the earlier three sightings, we were unfortunate not to be able to photograph this majestic predator.
We embarked on our last Safari for the year at 4.00 pm on 31st Dec, 2008. Both me and S were wondering if we were going to end 2008 as a dry year, as far as Tiger sightings were concerned. At 5:30 pm everything changed.
As the Jeep negotiated a turn on what’s called the border road (it is a jeep track that divides the forest between the states of Tamilnadu and Karnataka), I spotted the majestic predator of the Indian forest on the jeep track. I couldn’t believe my eyes and immediately shouted “Tiger…Tiger”, and the driver stopped the jeep and switched off the engines and there he was – a fully mature male Indian Tiger, in all his glory, lazily walking ahead of us on the jeep track. We decided that this time around we were going to make good of this rare opportunity. Here is a series of images of the “Ultimate Majestic Indian Predator” captured in the three minutes of sheer excitement when he was around.
All images are handheld shots taken with D300, 300mm f2.8 lens, ISO 400.

Then he went about scent marking the trees bordering the lantana, which is a typical cat behavior when completely relaxed. 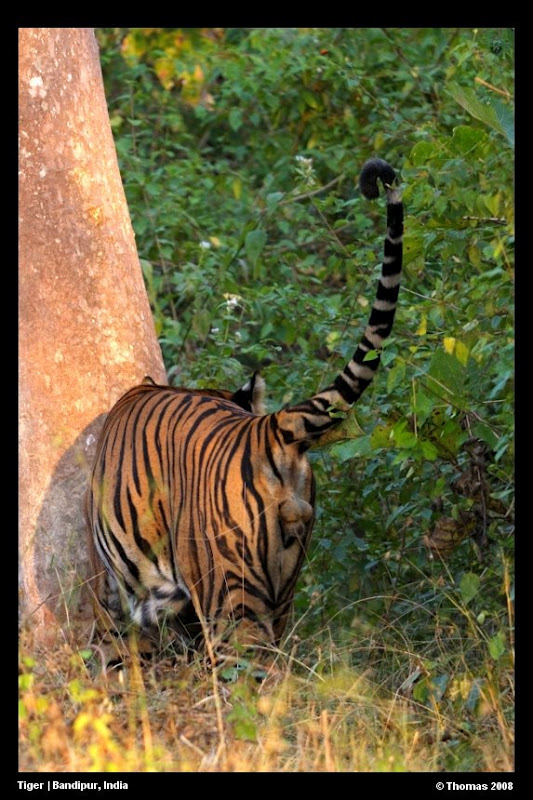 This image where his eyes are closed is another indication that he is actually not bothered by our presence. 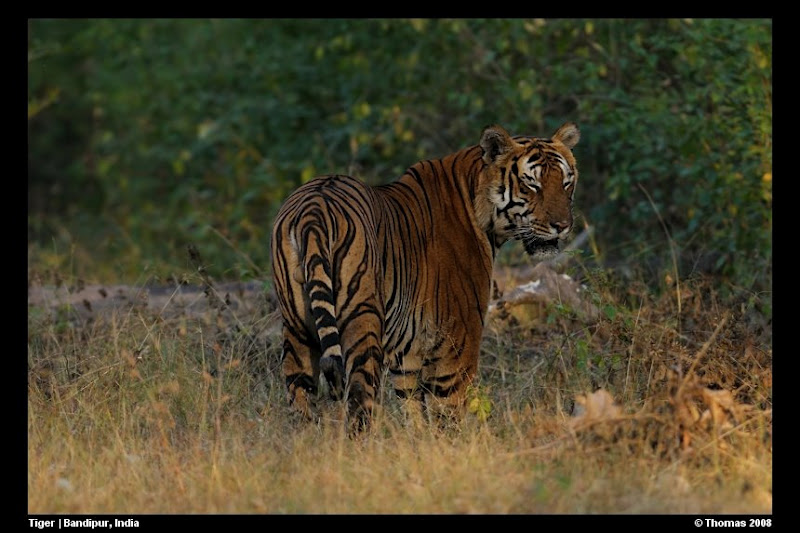 Here the sunlight was directly on his face and hence you can see the difference in the color of his coat. 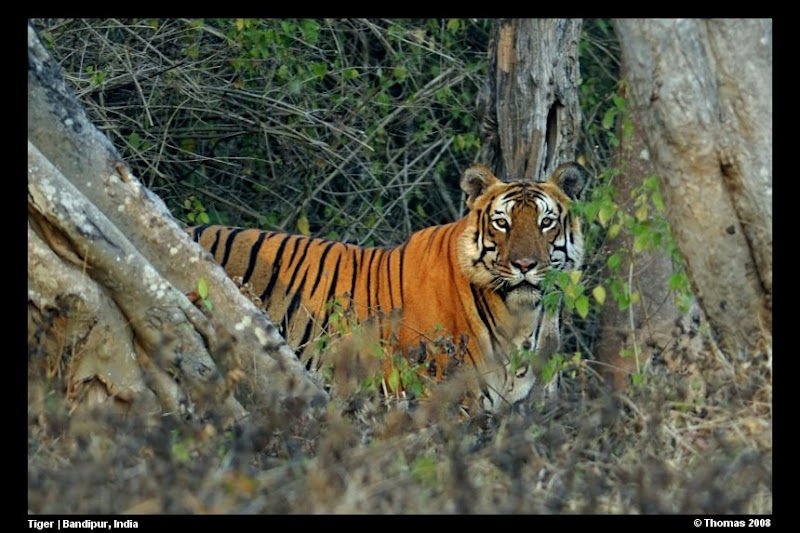 Here he gives us a look indicating that he was not very happy being followed by us. 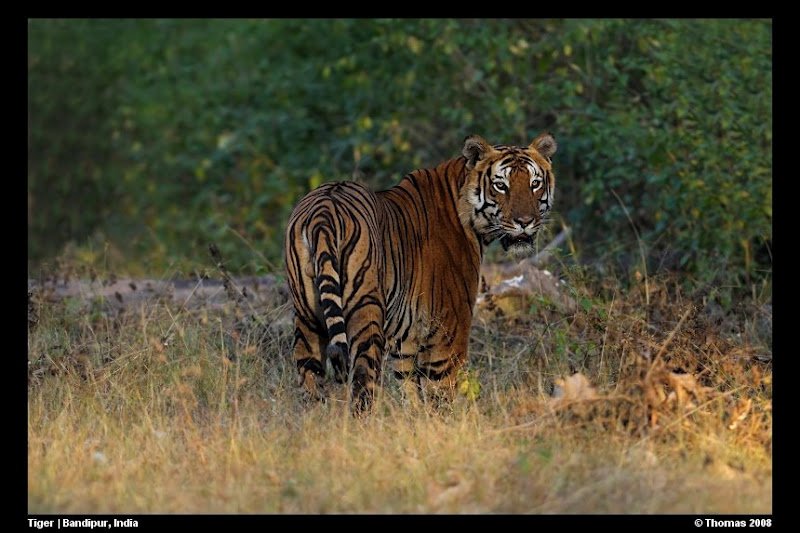 This was the final look he gave us before something attracted his attention across the track, which he decided to pursue and vanished into the lantana. 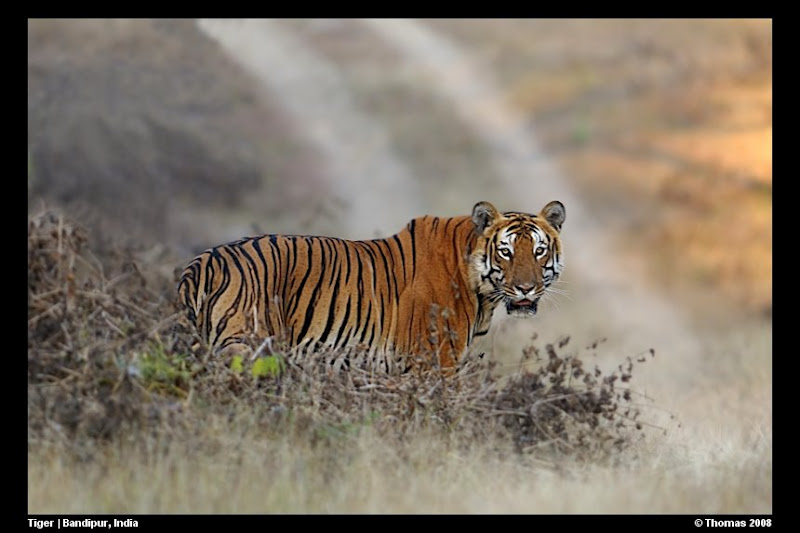 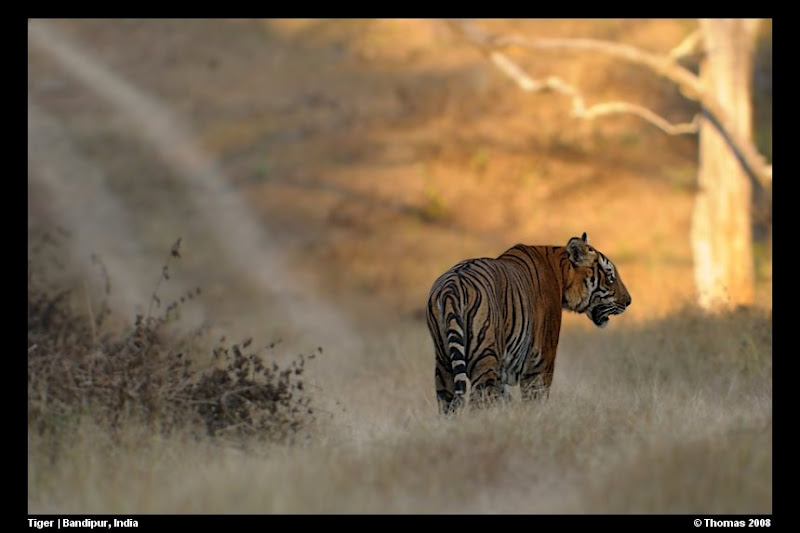 So this is how we ended Year 2008 on a spectacular high. We would surely cherish this experience in the Indian Wilderness for a long long time. Here’s once again wishing you all a very Happy and Happening Year 2009.