On a Tiger’s trail for two hours – Part 1 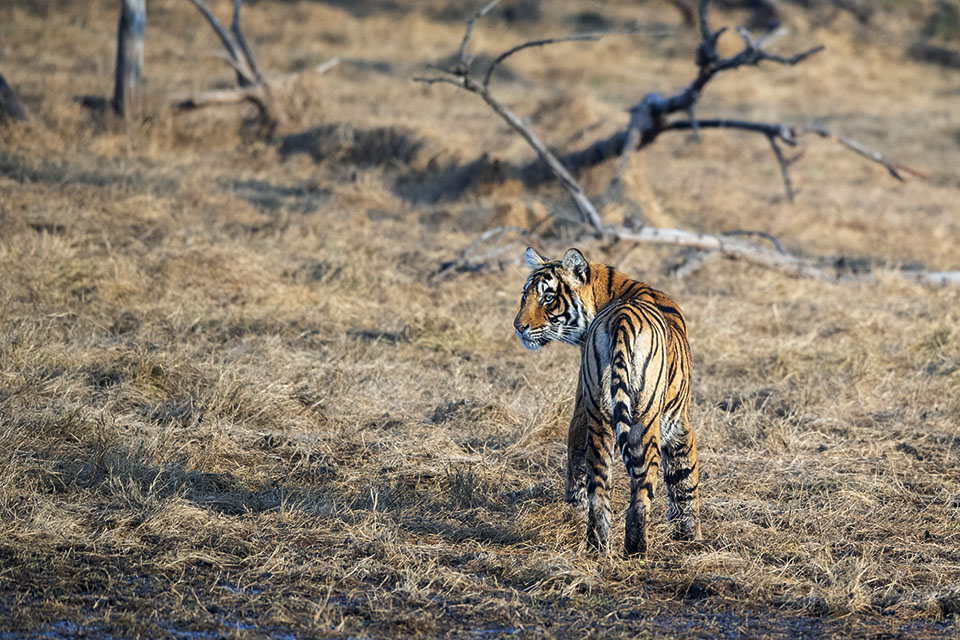 We were on our last evening drive on this trip to Ranthambore National Park, when our guide suggested we check out Malik Talab, one of the three popular lakes in the park. As we drove up the banks of the lake, we heard Spotted Deer alarm calls and we quickly spotted a Tigress basking in the afternoon Sun.

She was there for a few minutes, looking around, before she headed to the comfort of the tall grass lining the periphery of the lake. We decided to go in search of more game, but made a mental note to come back towards the evening.

When we came back to the lake, there were many jeeps lined up the banks of the lake. They were saying that a Tigress was hidden in the tall grass, probably waiting for some unsuspecting prey to come by. It took a bit of scanning around to spot her. She was perfectly camouflaged and we couldn’t have spotted her unless someone pointed to the exact spot where she was lying hidden. Soon a Sambar Deer came along and was feeding on the grass growing in the low lying water. She kept looking in the general direction of where the Tigress was hiding but did not spot it, given her amazing camouflage. Then a second male Sambar Deer came along and that distracted the first Sambar Deer and she turned away. The Tigress used the distraction of the second Sambar Deer to ambush. She came charging from her hiding place, but the Sambar Deer were a little further away and she messed up the kill.

The disappointed Tigress shredded off the unsuccessful attempt and headed back into the tall grass. Our guide was quick to point out that this time she would not rest in the grass, but most probably emerge on the other side of the tall grass onto the road. More about it in the next post.