Tiger makes a kill in Ranthambore 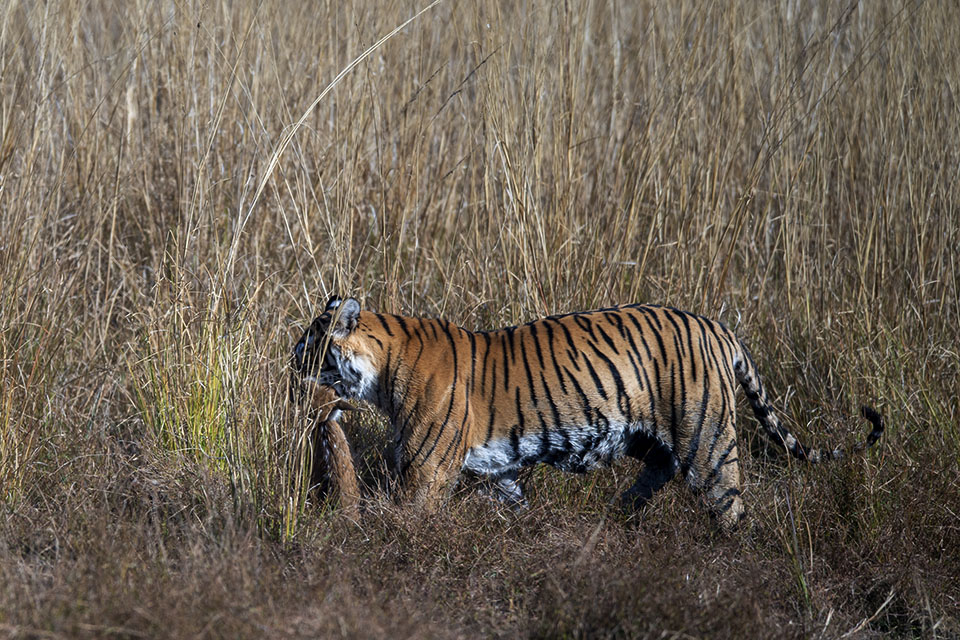 Continuing from where we left off in the previous post, the Queen of Ranthambore, Arrowhead made a grand appearance and emerged from the tall grass in full view of the many jeeps that were waiting to get a glimpse of her. Fortunately for her, she chose the exact spot where our jeep was parked, to emerge from the tall grass. It was an incredible sight to see a Tigress walk directly towards you!

She paused and looked intently at something in the grass and slowly headed off into the tall grass. Both our driver and guide were quick to point out that she might emerge at the water’s edge and we quickly moved to find a position on the other side of the lake, from where we could see her coming out of the grass. We positioned ourselves and waited for her. And what followed was a blur of action! As soon as she emerged, she started running fast as if on a hunt in the direction of something, and within seconds caught it. It took us a while to figure out what she had caught until she revealed her kill. It was a Chital fawn that was sitting hidden in the tall grass along the water’s edge. It was the end of life for the Chital Fawn as she became a snack for the Queen – that’s how nature is. But it was an amazing sighting to see a live action of a Tiger making a kill.