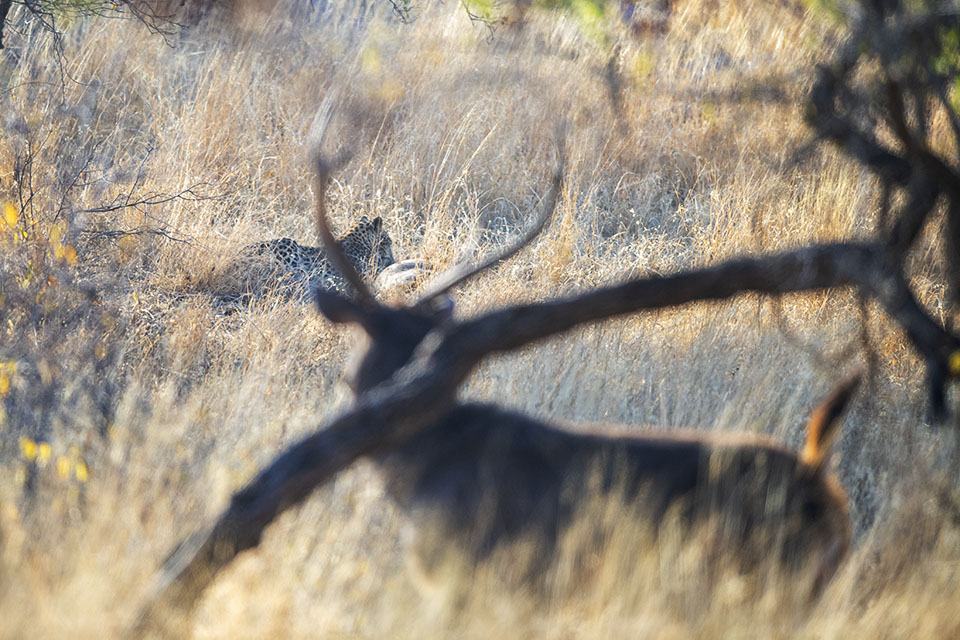 We were driving around in Ranthambore National Park on a morning safari, when we heard alarm calls of a Sambar Deer. We turned around and headed in the direction of the alarm calls. This part being a hilly terrain, our progress was slow and when we reached the area of the alarm calls, we spotted a Leopard, in the distance. And to our amazement, the Leopard had caught a Sambar Deer and was holding it down till it breathed its last. We watched the Leopard, drag its kill away to eat it in peace, while we headed off to have our breakfast at a nearby anti-poaching camp.

While we were having our breakfast at the top of a hillock, we spotted a Tiger, in the distance. It was walking in the direction of the place where the Leopard had dragged its kill. The Tiger, to whom this territory belonged, seemed to have been attracted by the Sambar Deer’s alarm calls. We observed the Tiger walk towards the exact spot where the Leopard was last seen. And then we saw the Leopard, leap up and run away, leaving behind its kill. We are sure, the Tiger took away the Leopard’s kill. This action was far away, barely visible through the binoculars, we only had our eyes to record the action. After breakfast, we headed to the Ranthambore prime lake, to see what Riddhi / Siddhi were upto today and we spotted one of them sitting, hidden in the tall grass stalking a couple of Wild Pigs. While she didn’t make a kill, the anticipation of her make a kill, kept the adrenaline flowing, It was soon time to exit the park and on our way out we got a huge bonus, stayed tuned to hear more about that in our next post.