Tiger with a Deer Kill in Bandhavgarh 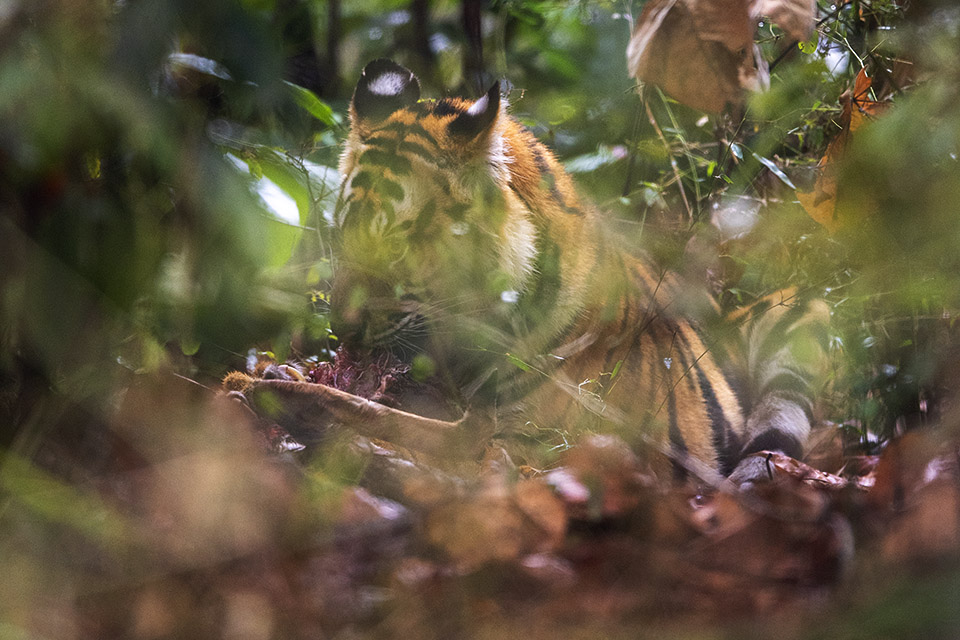 We were on our last safari in Bandhavgarh National Park and were hoping to sign off in style with a good Tiger sighting. We started off our drive and spotted this Langur with a young one clinging to it. Given that it was on the forest floor, it looked very anxious and soon scooted off to the comfort of a nearby tree. We didn’t have to go far before we hit a trail of vehicles and it was obvious that a Tiger has been spotted. Now it was left to our driver to find a good photography angle on this Tiger. Unfortunately for him, it was hidden in the bushes. After a bit of manoeuvering, we finally got a decent eye-level perspective and took a series of pictures. I should admit, it was more of a good sighting than a photography opportunity.

After a few minutes of watching the Tiger polishing off the remains of a Spotted Deer Kill, we realised that there were more to this party. We realized that it was a mother and her juvenile cubs that had been feeding on this Deer Kill. We caught a glimpse of the mother with another cub, before all the Tigers disappeared into the Bandhavgarh wilderness.

As we were heading out of the Bandhavgarh National Park, we spotted a White-eyed Buzzard foraging for prey, probably for lizards given that it was on the forest floor. We took a couple of record shots before bidding our goodbyes to Bandhavgarh.